May 13, 2010 – SOMERVILLE — Somerville police were flooded with phone calls this morning after residents reported seeing a large tube-like object fluttering through the sky.

Police said they were swamped with phone calls after a flurry of callers reported to radio station NJ 101.5 that a UFO was flying above the area. Residents then began calling the Somerville Police Department to report the object.
“I first noticed when all our mechanics started looking up at the sky,” said Terry Weil, a sales associate at Honda Autosport in Bridgewater. “It looked like a big black strip fluttering in the air. Maybe a cylinder.”
Somerville Police Lt. Donna Young said authorities were not sure what the object was, but said it caused no problems other than tying up police phone lines shortly before noon.
“We have no idea what it was but it did not cause any problems here in Somerville,” she said. “We are under the impression that it might be a weather balloon or something like that, but regardless, it did not cause any problems whatsoever.”
The Air Traffic Control Tower in Morristown did not have any pilot reports of the object, nor did officials at Solberg Airport in Hunterdon, Somerset Airport in Bedminster and Blairstown Airport in Warren County. 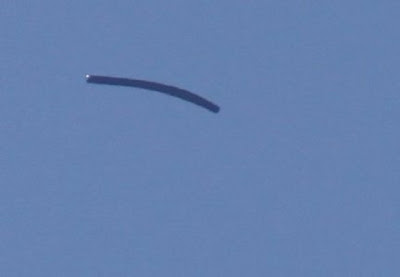 An unidentified object floats over Somerville and Bridgewater causing a flurry of phone calls to Somerville police this morning. Below, Damian Wadiak, Terry Weil and Jane Kronenwetter, from the sales department at Autosport Honda on Route 22 in Bridgewater, look at the object. (click on the photo to enlarge)
source: www.nj.com