Latest UFO sightings – Hampton Bays UFO cigar-shaped red and white lights near airbase in New York photographed on Friday, 2nd July 2010.
Witness report: First, a little background info on me — I’m a medium/paranormal investigator and so I am very sensitive to things occuring. It was about 9:20 – 9:25 pm EDT on Friday, 7/2/2010. I was working at my computer (with my back to the window). The blinds were up and I felt that feeling like someone was watching you, so I got up and went to close the blinds. As I did this, through the slats of the blinds, and coming in our direction (towards the house) was a bright red light. Now it looked triangular to me initially but that is because I was working on the computer and my eyes were tired tonight; I had a little blurry/double-vision going on which made the line of lights into two sets of lines. I estimated this array of lights to be about 1,500 – 2,000 feet above ground level. There is a thin combination of stratus and some low cloud cover and this thing was sort of moving quietly through the cloud deck. (If it was way up in the cirros-stratus cloud layer, it would have to have been going very fast; therefore, I believe it was much lower.) At first, I said to myself, “Oh, it’s probably a fireworks display.” (You know… when the rockets go up and then burst into all the sparklers, you get burning red embers coming down from the sky.) This was different however — it was tracking like a helicopter hovering in our direction. There was no sound of any prop or jet enging or chopper blades. Off in the distance I heard fireworks going off. But right above in our local sky, all was silent except for this thing as it headed in our direction. Dad was resting in the room and Mom was watching TV. The front door was locked so when I realized it may have been a UFO event, I ran to the front door, opened it and stood on the front steps and looked up at it. At this point it was in the sky over our general street area (but apparently higher up now) and it made a 90 degree turn to the right and was beginning to head out over the bay towards the ocean. I called out to Mom and told her I believed we had a UFO and she came outside and also witnessed it. We watched it slowly tracking to the southeast towards the beach. I ran inside and got my Olympus C2100 digital camera, hoping to capture a picture before it was gone. I took two photos. The first photo (although not zoomed in) caught the object and it’s light display. The second photo I tried hurriedly to zoom in and pressed the shutter button but it was too dark to see where it was in the viewfinder and unfortunately my zoomed in shot missed it out of frame. I have uploaded the pictures to the computer. I kept the original unedited photo but did make a cropped, close-up second copy to show it better. I will post the photo here shortly. Some more comments are in order: First, I am a pilot and this object had no navigation lights (such as red/green and white on the tail.) Second, there was no engine sound. Mom thought it may have been a blimp type of craft — but those have turbofan types of motors which are very loud. Third, I pondered whether this was one of those laser lights that establishments use to light the sky through the clouds to attract attention to their business or event. However, I feel this was more like a craft flying than someone pointing a large beam of light in the sky and moving it around. It can’t be a meteorite either because it made a 90 degree turn and was too long an event to be a burn-up in the atmosphere. Fourth, this is my second UFO event on Long Island (about 20 miles away from the other event). The previous event I witnessed occurred in Calverton near the closed military base there. Similarly, we live about 12 miles from an airport with a military base. (I actually learned to fly at this airport.) Fifth, if I was not seeing double vision and it was indeed triangular, perhaps when it turned towards the ocean, I was looking at only one side of it. Finally, I wanted to say that if this was something special (be it military, otherworldy or even a paranormal/spiritual event) I do feel the timing of my witnessing it was important. Another 20-30 seconds not getting up to go to the window, I would not have witnessed it. Therefore I feel I was connected to this event. Or perhaps I heard them calling me. Photo note: I have the original larger, uncropped unedited photo which is available for analysis if you need it.
Author (source: mufon) 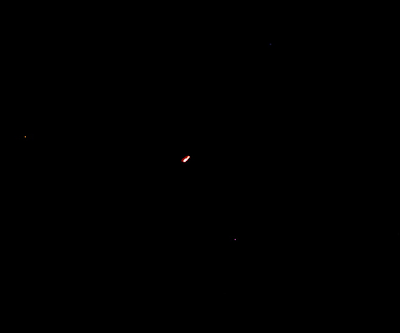 UFO display over NYC and recorded via webcam 13-Oct-2010