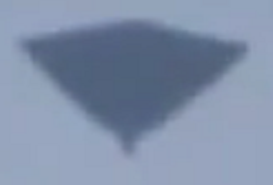 UFO sightings 2011 – This possible daytime video of black triangle in the daytime sky over Shirley in Southampton, England on was recorded on Thursday, 24th March 2011.

“We looked up into the sky and there it was – a black triangle,”
A new UFO sighting captured on video by Dilys Barlette from her backyard in Shirley, Southhampton reveals a large, black, hovering triangular shapped UFO!
“It did not seem to be moving left or right, it just drifted up into the clouds before disappearing,” Mrs Barlett said.
She said that she had no idea what this object could have been, but she did rule out that it was a kite because there was absolutely no wind that day.
Another witnesss, Leonard Cattley, spotted a similar UFO (perhaps the same one) on the same day and said: “It was hovering for at least 15 minutes so we got a very good look at it, if it was a kite it would have been huge
Author (ufohunter16903 @ youtube)
Your opinion?

Recent video of triangle formation in the sky over Brighton, UK, March 2011