September 15, 2010 – Marco artist Anthony Dallmann-Jones posted this blog about the UFO seen in the Gulf Tuesday night.
I am sure you have heard from people about “The strange lights” off the Marco Island Resident’s Beach last night.
We first noticed them at 8:35PM – They were there, in various formats until 9:15PM and were seen no more (by my wife and me). Neither of us drinks. 😉 We are also both professors of higher education so we are not totally unable to make intelligent judgments. Nuff on that.
We DO have pictures that my wife took…IF you are interested.
MOSTLY, I am hoping you can just tell me what we saw. I was a science major and this one baffled me in terms of a logical understanding.
Description. I do believe these were near the horizon line, although they started off closer. I believe they were receding to the West. I have some very powerful binoculars and probably saw things most did not.
WHAT were they? They were “hot” in the sense that they were glowing orange-yellow balls. Some might say they were lights on a UFO, and I can see how some of the angles would give that notion.
Here is what we noticed. The first four we saw were in an arc * * * * but rose in the middle like an eyebrow slightly. They would then “go out” and new ones would appear. They remained 2 – 4 minutes, would extinguish and would then new ones would suddenly “blink on”. The most there were at any one time was eight. They alignment was either in a bar or lights, one time they were in a V formation, and once in
an almost perfect octagon.
UPDATE:
VERY difficult to hold camera still when shutter stays open so long in the dark. They were not pulsating or moving around…just sat there and after 4-5 minutes dimmed out. As soon as they would “go out” more would appear…in sets of 4, never more than 8 at one time. The most telling was the octagon, especially when the lower right one “fell” into the ocean and there was a large flash.
They were up for 40 minutes…seemed to be going away as they were larger at 8:35 than at 9:15…when they were just gone.
Tony – they were golden and could have been a ball of fire…
Again, it is the smoke trails that we could could see via the binoculars – 15x that gave us pause to wonder…what the heck is emitting smoke that is stationery that high in the sky…?
Read more: www.marcoislandflorida.com 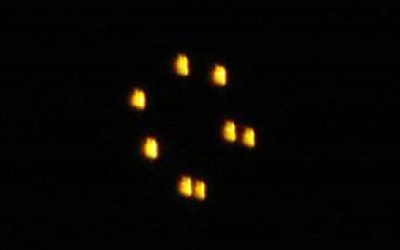 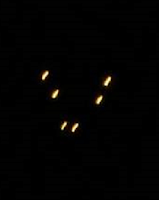 Submitted by Anthony Dallman-Jones (Special to marcoislandflorida.com)
Click on the photos to enlarge!
Your opinion?