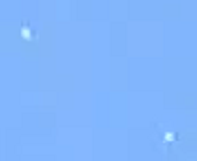 Latest UFO sightings – Footage of daytime sighting of multiple UFOs or Orbs flying in the sky over San Antonio in Texas. This video was recorded on Saturday, 30th October 2010 at 5:40 pm.
Witness report: …Latest UFO Sighting A Cluster of UFO ORBS…..On October-30-2010 a Cluster of UFO orbs were filmed traveling high in altitued over San Antonio Texas…As i was Skywatching I notice a glowing object that seemed to be hovering high in altitued right above me…..So I quickly grabed my camcorder and began filming this glowing object.I notice another Identical orb come into view..I could not belive what i was observing… When zooming in you can see these glowing orbs.As i began to zoom in you can clearly see they were not aircrafts..I was luck to have capture some footage.. ..These objects were traveling eastern dirrection.As they traveled high in altitude they appear to be glowing…I pan back to find a reference point and ended using the edge of the roof..As i began to zoom in you can clearly see these orbs were not aircraft….They did not seem to reflect the sun’s ray’s,they seemed to emiting some kind of glow.It took me by surprised,I did not expect to witness something.A short time later i saw three more orbs traveling behind in same dirrection…So i began filming these other ORBS..Just like the other orbs. These ORBS seemed to be emiting some sort of glow.Like energy wave around them..These glowing objects were clearly not aircrafts/ weather-balloons or satellites….
Author (SAUFOTX @ youtube)
Your opinion?