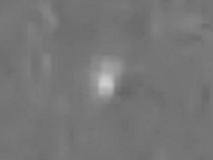 Large UFO was not visible but I captured a couple dot lights flying with very unnatural and amazing maneuverability, nothing like birds, no bugs yet for any bats ( Still around 5 or less degrees Celcius at night ) and this was well above the flight path of light planes.
This is flying ABOVE the general small plane traffic at least, so the speed is very fast. ( in 1 shot a single engine plane flies by )
So you’re looking at 1000 feet MINIMUM and ikely around 2-3000 feet plus the height of the object.
I saw this same type of flight characteristic in November in colder weather even, on my first sighting of the large craft but was unable to record the dot light
On that day it made a PLUS pattern in the sky and then after pausing, shot off towards buffalo at a much faster speed than seen here.
Author (shivercanada @ youtube)

Unknown lights in the sky over Niagara Falls in Ontario, Canada 17-Aug-2010