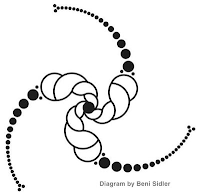 Discovered by the farmer himself on July 8, 2010, this 120 m diameter measuring formation was investigated by Beni Sidler of the Swiss crop circle research organisation “KORES” (www.kornkreise.ch) soon after its discovery. Inside Sidler found all traces and signs for a mechanical man-made origin of this formation. 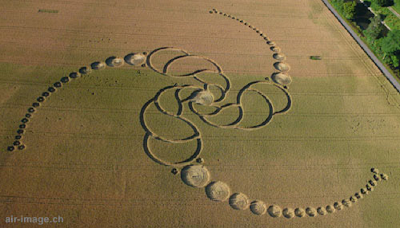 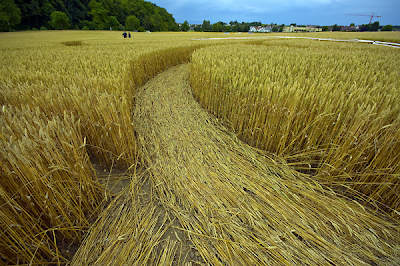 Guys Cliffe, near Old Milverton, Warwickshire, UK. Reported on Saturday, 10th July 2010:
Here are some photos for you. It’s a beautiful location there, overlooking Guys Cliffe house, and near to the Saxon Mill, good for food and a drink. Meet a few people there, lots of interest and excitement. 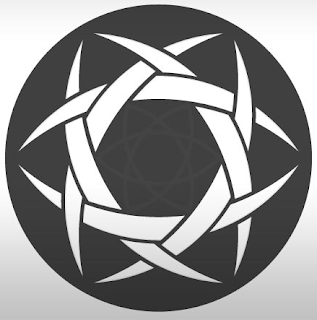 The formation is best viewed from the public path that runs out from the church at Old Milverton. The lay is interesting, crossing over itself in many places. It looks to be around 230-300 feet, comprising of crossing arcs. We meet a man running who was originally from Oxfordshire, he was very enthusiastic and told us to walk up the hill to get a better view.

The crop is laid so flat to the ground, and areas of the ground are showing through, it’s the closest laid wheat I’ve seen in a formation. The centre area lay is unusual, hard to tell what the design is from the ground, but once you look at the pole shots there does seem to be intersecting arcs and a ghost image in the centre within the lay, which is shown in the hill shots also. The formation is hard to find from the lower public path, so keep your eyes peeled.
“Other points of Interest is the chapel nearby the house has Masonic connections” and the “old house has been investigated by Paranormal Nights”
This formation warrants an aerial shot due to the shaded pattern within the centre which at ground level can be quite deceptive. One angle can give you a visual of the typical alien head and another an eye and another petals. To capture this shading in its full glory sunlight if essential which on this day cloud and rain ruled the outcome of my visit.
The wheat in this field has been planted almost in the same manner like maize so quite a few gaps in-between the wheat hence the visible soil in the lay.
The lay itself is in almost mature wheat which brings home a fact to how far we are into this years crop circle season, but nevertheless quite neat design throughout the entire formation with equal elements.
This formation is not easy to spot even if you walk along the path which is approx 30-40 feet away so constant observation is essential as long as you can see Guy Fliffes House then at least you know you are heading in the right direction.
Drizzling rain made photography difficult so It was a race to grab as many photos as possible before heavier rain arrived.
While I was taking shots 3 orange lights appeared in the tree line which then moved quickly towards the visible property and then disappeared quite distinctive spherical shape which flared with intense brightness for a few seconds or so. 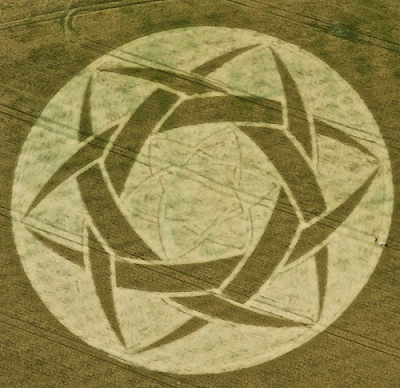 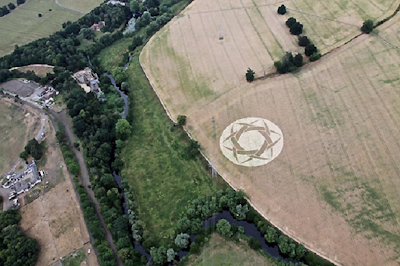 Clifton, near Brighouse, West Yorkshire, Enlgand. Reported on Monday, 12th July 2010.
Crop circle at Cliffton, nr Huddersfield West Yorkshire just off m62 near Brighouse. About 9 circles 1 large with outer ring then smaller circles in a row with 2 small ones to the side and I got loads of pictures from ground but no birds eye view though also took samples of crop and some stones from centre of circle. 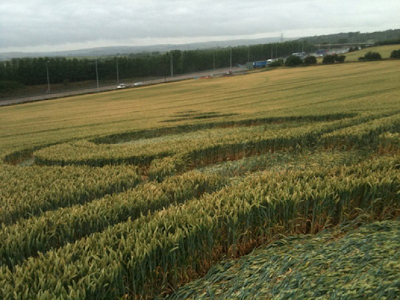 Click on the pictures to enlarge!
source: www.cropcircleconnector.com
Your opinion?