Place of sighting: 122 Van Vlack Road Hopewell Junction, NY 12533
Date of sighting: December 7th, 2010
Description: I was driving home on the highway the other night and there was this strange beam of light that didn’t appear to be coming from ground but was way too large and bright of a light to be an airplane or anything of that sort. My dad and I followed the light and as we got closer to home, we were beginning to get closer to the light. Once we were in town we realized the light wasn’t too far so we decided to further follow it. When we finally got to where the light appeared to be originating, the light mysteriously disappear. We then turned around and about 5 minutes later as we were driving back home the light re-appeared. We went home, I grabbed my camera and got some really good shots of the light. We went back to where the light was and it once again disappeared just as we approached it. The! first and second pictures I will upload are originals and the third is a retouched photo.
Author: Dylan Q.
source: submitted to www.Latest-UFO-Sightings.net 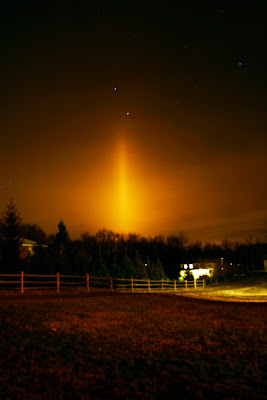 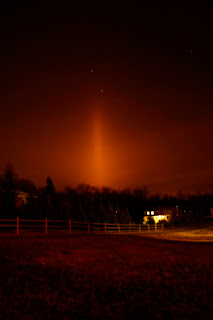