On February 10th of 1977, a strange sight was seen in the sky of Flora, Mississippi. Witnesses included police and a man named Pat Frascogna. Though it has been more than thirty years since the date of this bizarre event, the sighting of an unidentified object in the sky has stayed with Mr Frascogna and spurred him on to researching the phenomena of unidentified flying objects. He has become involved in the community of UFO enthusiasts at least as far as speaking at the most recent Mississippi UFO Conference. Mr Frascogna is also working on a book, based upon his own research and the information he has gathered from other witnesses of the odd occurrence. 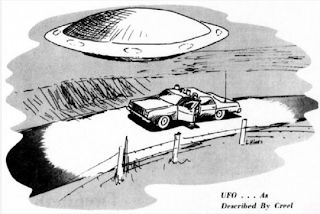 His investigation has lead him to two patches of earth where plants no longer grow. Each patch is roughly circular and approximately fifteen feet in diameter. Both of these patches, very near each other, are devoid of plant life. Mr. Frascogna has sent soil samples to one of the universities in the state of Mississippi in hopes of finding some sort of anomaly in the soil that might explain the lack of growth. He also continues to search for witnesses, in hopes of learning everything he can.
In his own recounting of events, he states that the airborne object hovered nearly twenty feet above the ground for approximately forty five minutes before moving. As it started moving, he states that police started to follow the moving object until it could no longer be seen due to the tree line.
While Mr. Frascogna wants to have all of the facts before drawing conclusions about the origins of the flying object, be it terrestrial or not, he reiterates the events strangeness.
www.Latest-UFO-Sightings.net (c) 2011
Your opinion?