Your UFO reports: 14th June –  21th June 2014
Did you see a UFO? Report it using this form or send us e-mail to report@latest-ufo-sightings.net !

I took these pictures on Friday June 20.

Walkin home after watchin england get beat a was lookin up at the stars a very nice clear night. When I noticed a big bright star traveling from south east to north west at 1st a thought it was the iss untill it disappeared then reappeared again then blew up like a flash of lightening on a small scale. To b honest it looked like a plane blew up but with a pure white flame 1 big flash followed by 3 more big flashes then it turned back into the big bright star then just disappeared. A stood their for about 15 mins gettin me head together an walked home. Got in 2 min later an told me missus me son an daughter an as a was tellin them i was stood on me back door wen i seen another big bright star flashin on an off goin in the same direction as the last big bright star. All 4 of us witnessed that. A stayed in garden for 2hrs an seen 6 different stars objects ufos. Am a firm believer an seen a few things but this sightin was weird. If anyone else seen this let us know if poss so i know were not goin mad.

Virginia Beach – 16 JUN 14 0636Z
Pinkish-white orb resembling a larger meteor traveling at extreme rate of speed first appearing from the Northeasterly skies if looking towards Deneb in the Cygnus constellation and headed towards the proximity of Arcturus in the Bootes constellation in the background of the Southwestern skies, before it suddenly hooked towards the West-Northwestern skies then vanished from sight. Duration was less than 1 second. Occurred approximately 0136 Local visible from 23464 area in Virginia Beach, Va. Unable to determine approximate altitude or shape. It was first assumed to be a meteor until the drastic and undeniable change in direction.

My living room blinds were lowered halfway down, when my eye was attracted by something. On top of the hill behind our building, around the top of the tallest grouping of trees, were green spheres floating about. (The green was slightly lighter than a GO light). This happened very fast as I didn’t have time to count them all but there was a minimum of 5 and from a distance they appeared to be bigger than basketballs. I could see they were of solid light as opposed to diffuse. They disappeared. Expecting something else about to happen, I turned off all my living room lights and waited. A few minutes later, around 9h15, the hill was swept with what I could only describe as something akin to a green (same green as the spheres) laser(?) beam that swept the hill back and forth 4-5 times, 10-15 feet above the hill top. The beam was truncated into equal lengths. It swept from behind the trees to the left right up to the right above the low income housing units as if scanning the plateau. The beam of light was PARALLEL to the plateau. It did not come from above. This again, didn’t last long but it was real, no two ways about it. 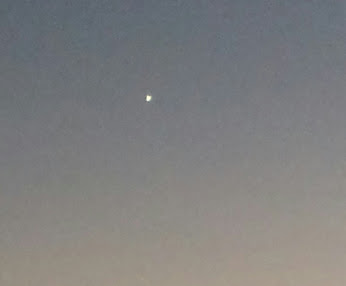 It was cold that afternoon and I went outside in the garden with my dog.I saw a very bright star as i thought appear in the middle of sky. It was glowing unlike anything I saw before, changing colours and I noticed it is moving and getting closer. I felt this is something spooky and I ran into house to look this “star” from my window.I saw it flew in another direction and glow there even more brightly. It remained in that position about an hour (so I had the time to take this photo from my window) before it flew to the right and went away.

Ana
– – – – – – – – – –
Wirral, Cheshire, UK – november 2010
My two stepdaughters,myself and one of their friends went into the back garden,which faces west,for a cigarette when this sighting occurred.We were all shocked when we all witnessed 3 red flashing lights,on a 45 degree angle,and obviously attached to a single craft,travelling from north east to south west toward the Irish sea.This craft was silent and I reckon it was at an altitude of about five hundred feet from the ground.I could not determine its exaxt size,but I estimated its size at about 60 foot long and at about 200 foot above this craft were red and white lights,which looked like aeroplane lights,following the larger craft.The girls went back into the house but I sat atop my garden fence and watched it disappear into the distance toward the Irish sea which is about five miles from where I live.The both craft were travelling at the same speed as an aeroplane,but this was no aeroplane.My only regret is that I did nt think to get pictures of what we saw,but I was dumbfounded at what I was witnessing.This sighting is as vivid in mind as the night I saw it.
Brian
Your opinion?