“It was shortly after midnight on 1st January 2010 in Los Cristianos, Tenerife, Canary Islands. I was looking south over the town and enjoying the fireworks celebrating the New Year when I saw a flaming, orange-red, round object come from behind the hill to my left (south of me) and proceed out to sea at what looked like about 500-800 feet altitude. I grabbed the camera but didn’t have the presence of mind to steady it properly, thus the wobble in the video. You can hear my partner in the background talking to her parents in Scotland, whom she had phoned to say Happy New Year. I videoed it for a few minutes and put the camera down as the battery was low. Shortly afterwards, a second object appeared to my right (north of me) and headed out to sea on a heading which would take it to meet the previous object’s position. Why I did not film this as well I cannot explain. It wouldn’t have mattered if the battery had gone dead, I should have taken the footage anyway. Later, looking at the video of the fireworks taken just after midnight (before the appearance of these two objects) we saw what looked like three of these objects in the sky on the left when the sequence opens, in a roughly triangular shape. The camera pans to the right to film some fireworks, and when it returns, you can see there are only two of the objects left in the picture.”
Colin (author)
source: Submitted to www.Latest-UFO-Sightings.net 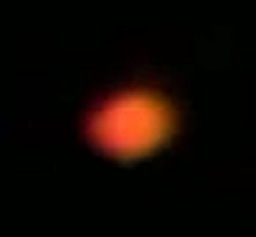