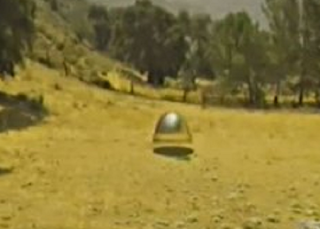 September 1, 1974 – Edward Fuhr, a farmer, while working in his field in Langenburg, Saskatchewan, observes a silver flying saucer UFO that had landed and four others flying in the vicinity.

A number of crop circles are left in the field below where the saucers were seen.
The case is investigated by the Canadian RCMP and the Center for UFO Studies (CUFOS), both conclude it was no hoax.
The article has been published in the daily newspaper The Star Phoenix, Saskatchewan, Canada, on 10th September 1974.

LANGENBURG (CP) – RCMP Constable Ron Morier says he doesn’t think a district farmer is trying to pull a hoax with his claims of seeing saucer-shaped objects hovering about a foot over a slough near his rapeseed field six miles north of here.
Edwin Fuhr, 36, claims five stainless steel objects stayed for 15 minutes before leaving. He says there were depressions in the foot-high grass about 11 feet in diameter where they had been.
Constable Morier visited the farm Monday in this community 120 miles northwest of Regina for a first-hand look.
“They took me out to where they’d seen these things in the grass. I saw the rings…”
“Something was there and I doubt it was a hoax. There was no indication anything had been wheeled in or out and Mr. Fuhr seemed genuinely scared.”
Constable Morier took photographs and measurements and sent his information to the National Research Council in Ottawa.
“Some farmers are afraid to work in their fields,” the Constable said, “At least that’s what I hear on coffee row.”
Mr. Fuhr says he got down from his swather and moved to within 15 feet of the objects.
“All of a sudden I noticed the grass was moving … turning near this thing. I just watched it for about two minutes and then noticed the whole thing was turning.”
“I backed up slow. I wasn’t going to turn my back on the thing. When I got back to the swather, I noticed there were another four to the left of me, all revolving. I just froze on the seat and didn’t move.” 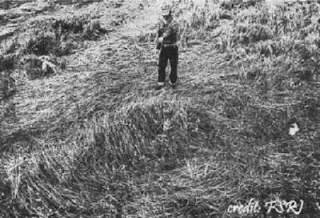 “I was terrified. I froze. I couldn’t do anything.”
“Then they took off (after 15 minutes) … straight up. There was a grey vapor coming from underneath them and a strong wind. I had to hang on to my hat and it knocked the rape down.”
It took two minutes for the objects to disappear into the clouds and another two minutes for Mr. Fuhr to come down from his swather.

“I wanted to be sure they were gone.”

He then explained the circular depressions left by the objects. “I felt the grass to see if it was warm. There was nothing you could feel and there wasn’t any smell.”
Your opinion?