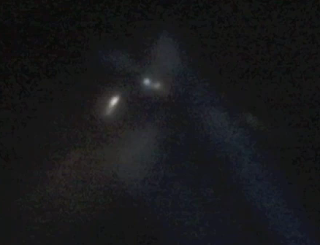 Taken outside the Wild Mushroom on Ferry Street in Niagara Falls this video shows most clearly what I and others have seen many times, what l captured ( though not as clearly ) the lights being CUT OFF by an object, but this video not only shows that, but shows a triangular shape, and in 1 frame what looks like a PYRAMID but it’s not clear enough to tell that part.
The blue flash seems to be close to the TIP of the triangle shape and the rest of the lights seem to be from the Propulsion system.
This craft has no lights at all which make me wonder of it’s origin!
There are many theories, but all are only guesses, the only thing that is sure is it is a SHIP of some kind, VERY large, black, completely light absorband and at least partially triangular .
Author (shivercanada @ youtube)
LUS 2010 – most recent Latest UFO sightings reports and evidences. North America ovni documents and secret files – Greys aliens 2012 conspiracy.