Another crop circle was found in England on Sunday, 16th May 2010 in Yarnbury near Winterbourne Stoke, Wiltshire. 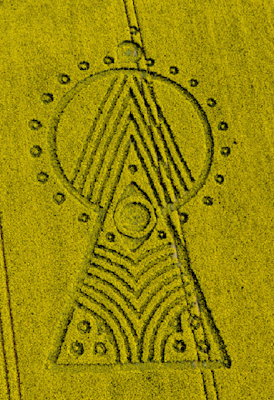 This new formation at Yarnbury Castle has some rather fascinating aspects to the design. Certainly a strong connection to Masonic history. On the ground the formation wasn’t neat. A lot of breakage, however I have always stated that the phenomenon is not always as perfect as people suggest. 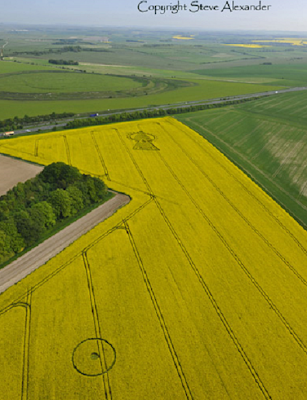 Drive past Stonehenge on the A303 towards Winterbourne Stoke. Approx 3 miles along this road is Yarnbury castle on your Park in the lay-by opposite – formation is in the field by lay-by directly behind the trees. It is in Oil Seed rape. 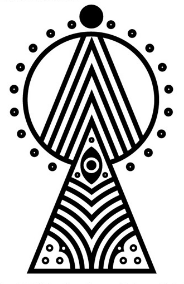 When I first heard of this new event at Yarnbury Castle, I was immediately transported back to the early years of Crop Circling, 1991 to be exact! I was only 22 then, and could remember in my tiddy excitement driving down to this encampment to search for what was the very first formation to appear in that famous year. Unfortunately I was unlucky in finding this event, very much like a number of researchers for this year formation. 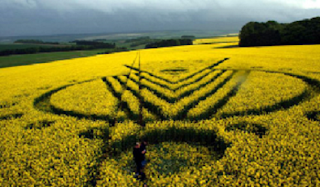 They say, History can repeat itself, well obviously this was the third event in 2010, but it was also positioned in the exact same field as the 1991 event, and in the same crop. Back then it was a long Dumbbell design, very simplistic compared with what was to come in later in that year.
Its very hard to spot formations in this area, the A303 makes its quite dangerous in fact, with traffic travelling past at 70 miles an hour, its rather disconcerting.  However this area is steeped in history, with the early settlement positioned across from the formation, and with many other ancient features like Tumuli, and Enclosures. When you stood inside this formation, it wasn’t like standing on well known soil of the area around Avebury. This was something different, something more tangible, mysterious, and silent.
I have been noticing this year, how the first formations have been fascinatingly connected to each other regarding their alignment. We discussed how the Old Sarum formation had a direct relationship with the Stonehenge design, positioned rather carefully on the edge of an important Ley Line, connecting the two sites.
It would appear that the Yarnbury Castle design, also has a connection with the other two. Although not a true Triangle, the three formations do create a triangular pattern across the landscape. What is also intriguing is that there is also an alignment (or possible Ley Line) connecting Old Sarum with Yarnbury. This I’m sure is a distinct possibility, as many ancient settlements have an alignment relationship.  Between Old Sarum and Yarnbury Castle, is Stapleford, a small village along the River Till. Here there once stood a medieval Castle with its Earthworks still intact. It resides on the flood plain of the River Till, and is aligned directly with the other two ancient sites.

Why are we being shown this so soon within the season of 2010?  Perhaps we are drawing closer to understanding the behaviour of the phenomenon and its strong connections with the past?  Was it just a strange coincidence that I mentioned about finding the Key to unlock the phenomenon’s secrets in 2010.  This formation at Yarnbury has an uncanny resemblance to a “eyhole” Perhaps the key is to understand ourselves within this mystery and how we interact with the phenomenon, raising our awareness to potential truths.
Authors: Mark Fussell & Stuart Dike
source: www.cropcircleconnector.com
Related posts: Crop circles
–
Your opinion?