2010 – ALAMOSA, Colo. – Authorities in Colorado’s San Luis Valley are trying to solve a series of bizarre, gruesome slaying: cows, mutilated, carved up, left to die in the fields. 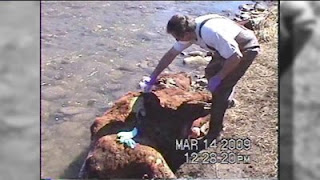 Police are stumped. But rancher Mike Duran, who lost two of his cows to mutilation last December, has a theory that is literally out of this world. He says it was aliens.
“It’s almost like the animal was taken away, killed, surgically manipulated and brought back,” Duran told us.
Some of the wounds on one cow were “like laser cuts,” he said. “There was no blood. No tracks. No witnesses at all.”
“Some people say it was a cult. But even if it was a cult, we would find tracks or something like that.”
In Duran’s mind, that leaves only one other option.
“I believe there are aliens. People may laugh at me for thinking that,” Duran said. “(The aliens) do what they have to, and then they bring (the cows) back and they drop them back in the field. And that’s why there are no tracks.”
Duran is not alone.
“The (female cow’s) sexual organs were removed, the eyes were removed, a tongue was removed,” said Chuck Zukowski, a self-described UFO investigator and reserve El Paso County Sheriff’s deputy, who is trying to solve Duran’s case.
“The pattern is that of surgical cuts. There are no bite marks. There are no scratch marks. There’s no carnage on the ground…It’s as if it was under surgery.”
Duran says he found a powerful electromagnetic field coming from one of the cow’s carved-out head, only adding to his suspicions that aliens are to blame.
“In my opinion, this is probably one of the best cold cases we have,” Duran says.
The Colorado Department of Agriculture, however, doesn’t buy the extraterrestrial theory.
“Postmortem changes on an animal happen very fast,” said Nick Striegel, a veterinarian with the department. “Predators are coming in…they can lick up that blood. Insects and other parts of the decomposing process can digest body fluids.”
If not predators, Striegel says it is also possible that people could be involved.
You be the judge.
source: www.kdvr.com

UFO video: Multiple lights in the sky over Denver in Colorado Nov-2010