June 5, 2010 – An astronomer says a bright spiralling light spotted in the sky by people across eastern Australia was probably a satellite, space junk or a rocket. 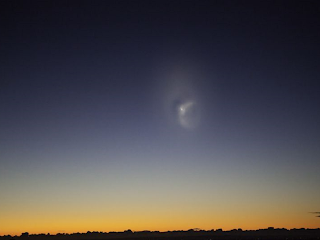 The UFO was seen moving through the sky just before Saturday’s sunrise in New South Wales, Queensland and the ACT.
ABC News Online has received dozens of emails, pictures and videos from those who claim to have witnessed the huge white light.
Some described it as a “lollipop-type swirl”. Others say it hovered for a while before gradually moving in an eastern direction until it was out of sight. Those who saw the object say photos do not reflect how large it actually was.
Geoffrey Whyatt from the Sydney Observatory says it was probably a satellite, space junk or a rocket.
“The fact that you’ve got the rotation, the spiral effect, is very reminiscent of the much widely reported sightings from Norway and Russia last year, which both turned out to be a Bulava missile which was being adjusted in its orbit,” he said.
“So possibly a rocket, I would say, having some sort of gyroscopic stability rocket fired on its side.”
Mr Whyatt says it is a rare phenomenon.
“The first I saw of the spirals was last year when they were reported in Norway and then a few days later in Russia,” he said.
“The Norway one was very spectacular because of its symmetrical appearance.
“But the one this morning and the one in Russia bear a striking similarity of being the same effects from a rocket trying to be controlled or adjusted.”
A privately-owned rocket launched from Cape Canaveral in Florida on its first test flight is believed to be responsible.
But Doug Moffett from UFO Research NSW says he has a few problems with this theory.
“Firstly, the time of the launch was 18.45 GMT, which translates to 4.45am EST, the duration of the flight was 9 minutes 38 seconds – this is a full hour before the reported sightings,” he said.
“Secondly, where was the glow from the boosters or from the friction created by the craft moving through the atmosphere, where was the tail of the rocket?
“Thirdly, why would anyone launch a rocket on a maiden test flight with a trajectory that would take it over the most heavily populated parts of Australia?
“And how big must this rocket have been to be seen so clearly, at the same time, over such a vast distance?”
‘Like a bright star’
Canberra resident James Butcher says he was driving home from a night out with his brother when they spotted the “strange spiral light in the sky”.
“It had a distinct bright centre, much like a bright star, indicating an object shedding light trails, spiralling and fattening out from it,” he said.
“The effect lasted only two or three minutes, moving and descending quickly out of view.
“The colour was yellowish but this may have been blurred and tinted by the morning fog.”
Wollongong man Eddie Wise says he also saw the light during his morning walk just before 6:00am. 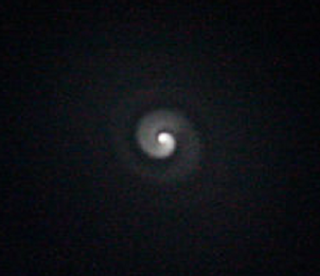 He says he has never seen anything like it.
“It was like a yellowish, greenish light with a light spiral around it,” he said.
“It sort of moved around, bobbed up and down and then it went behind a cloud.
“I’m just amazed. I want to know what it was.”
A caller to the ABC, Robyn, says she saw the phenomenon from her home on Sydney’s north shore just before 6:00am.
She says it was over within two minutes.
“There was this white light up in the sky like a huge revolving moon,” Robyn said.
“At first I thought it was the moon but it was travelling so fast, high up above the eastern horizon and twirling as it went.
“It was just amazing and to be quite frank, I was quite frightened and my heart’s still pounding.”
‘Lollipop-type swirl’
A number of people from Morayfield and Caboolture in Queensland have reported that they too saw a white light in the sky about 5:50am.
“It was just the one light. I just came home from my walk and I happened to look up in the sky, and here it was racing across the sky,” Linda told 612 ABC Brisbane.
“I bashed on the window for my husband to have a look and he flew out.
“It was spectacular.”
Linda described the light as like a lollipop swirl.
She says the light came from the west and was headed east, out to sea. 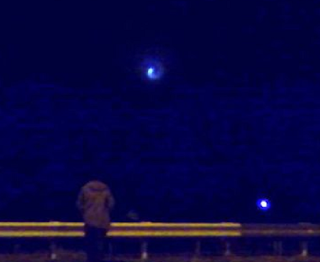 “It was just unreal. There was a cloud in the sky – just this light with a swirl in the middle,” she said.
Peter, from Balmoral, says he saw the light while he was on a ferry terminal on the Brisbane River.
“It certainly had that lollipop-type swirl … but it was travelling low and fairly fast, and as it went past me and I looked up, it looked like a row of lights, maybe four lights,” he said.
Denise, at Pine Mountain, told ABC radio in Brisbane that she saw the lights shortly before 6:00am.
“I got up at about 5:45 to let my horse out of his stable … and I saw this coming from a north-west direction towards the south-east,” she said.
“There was no noise. It was like bands of ribbon coming out of it and it looked like it was coming through a cloud, yet there were no clouds.”
source: www.abc.net.au
link: UFO spiral in Norway 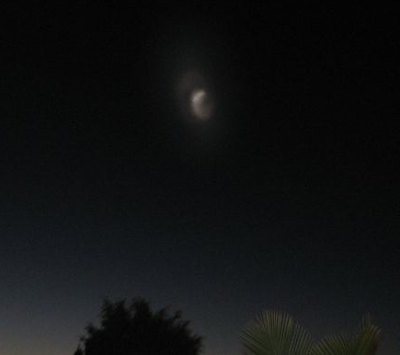 UPDATE:
US rocket launch sparks Australia UFO frenzy
A bright spiralling light, believed by astronomers to be a rocket launched from Cape Canaveral, was spotted in skies across Australia’s east coast just before dawn on Saturday, sparking a UFO frenzy.
Described by some witnesses as a “lollipop-type swirl”, the cloud of light was seen over the country’s three easternmost provinces – New South Wales, Queensland and the Australian Capital Territory – shortly before sunrise.
“It had a distinct bright centre, much like a bright star … (with) trails spiralling and fattening out from it,” Canberra resident James Butcher told broadcaster ABC of the spectacle, which he said lasted two or three minutes.
Other witnesses likened the spectacular phenomenon, footage of which was quick to hit the Internet, to a “huge revolving moon” with a swirl in the middle, or an illuminated cloud moving high and fast above the horizon.
“It certainly had that lollipop-type swirl … but it was travelling low and fairly fast, and as it went past me and I looked up, it looked like a row of lights, maybe four lights,” one Brisbane resident said.
Astronomer Andrew Jacob, acting curator of the Sydney Observatory, said it was most likely SpaceX’s Falcon 9 rocket, launched Friday from Cape Canaveral shortly before dawn broke over Australia.
“It fits best, a rocket travelling overhead with something venting out of it, fuel venting out of the motor,” Jacob said.
“The rocket’s probably tumbling or spinning a little which creates a spiral effect, a little like water coming out of a hose when you spin it. That’s the best explanation I have so far, probably the most likely one.”
The light was travelling the wrong way for it to be an astronomical phenomenon, and Jacob said he had ruled out other possibilities such as comets, a spotlight on cloud or reflection of the moon, or a meteor shower.
He said the timing was right for the SpaceX rocket to have travelled over the Atlantic Ocean, Africa and the Indian Ocean and be in skies over Australia at the time the spiralling light was seen.
The fact that it could be seen over such a broad area meant whatever caused the flare had to be very high in the atmosphere or in orbit above the Earth, Jacob added.
“All the information points to this SpaceX rocket,” he said.
The launch of the privately owned Falcon 9 test rocket marked a milestone for the space industry in the race to develop commercial carriers capable of ferrying cargo and astronauts to the orbiting International Space Station.
source: www.hindustantimes.com
Truth or just a cover up?