Latest UFO sightings – UFO activity over UK photographed in July & August 2010.
Witness report: During my England trip this year (July 26 till August 13, 2010) I took some pictures at different locations from objects, that I was not able to identify. You find them in a zip file attached to this email. The photos were taken in Rye, East Sussex, on July 28, 2010, in the Dartmoor National Park on August 02, 2010 and at the Alton Barnes crop circle on August 08, 2010.
I didn´t realize the objects when taking the pictures and just saw them when I was checking the photos afterwards. The objects are no birds, planes or other things I could identify. They are also no lens pollution etc. since pictures taken just seconds before or afterwards didn´t show the objects.
I´m aware that this subject is greatly controversal, but I ensure you that all pictures are completely unedited and unmodified, except for brightness and contrast enhancement on the respective third picture of each object.
Author: Melanie S.
source: submitted to www.Latest-UFO-Sightings.net 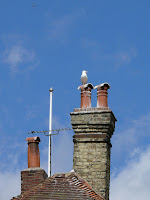 Crop circle and beam of light recorded over Wiltshire, UK