The veterans claim the U.S. and UK governments covered up the UFOs incidents. At the event in Washington TODAY the men will release declassified U.S. government documents which they say back up their claims!
Aliens ‘hit our nukes’: They even landed at a Suffolk base, claim airmen
September 27, 2010 – It may sound like a Spielberg movie plot, but if senior U.S. airmen are to be believed, this scenario is not science fiction.
They claim that since 1948, aliens have been hovering over UK and U.S. nuclear missile sites and deactivating the weapons– once even landing in a British base.
Furthermore, they warn, our governments are hushing the activity up.
Captain Robert Salas, who, along with six others is to break his silence on the subject, said: ‘We’re talking about unidentified flying objects, as simple as that. 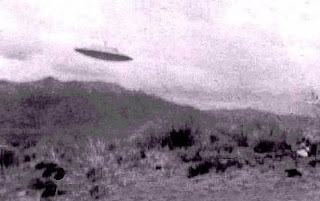 ‘They’re often known as UFOs, you could call them that.
‘The U.S. Air Force is lying about the national security implications of unidentified aerial objects at nuclear bases and we can prove it,’ he said.
The former officer said he witnessed such an event first-hand on March 16, 1967, at Malmstrom Air Force Base in Montana.
‘I was on duty when an object came over and hovered directly over the site.
‘The missiles shut down – ten Minuteman [nuclear] missiles. And the same thing happened at another site a week later. There’s a strong interest in our missiles by these objects, wherever they come from. I personally think they’re not from planet Earth.’
Colonel Charles Halt claims to have seen a UFO at RAF Bentwaters, near Ipswich, one of the few bases in the UK to hold nuclear weapons.
The sighting is said to have taken place 30 years ago. First he saw the object firing beams of light into the base then heard on the military radio that aliens had landed inside the nuclear storage area, he said.
‘I believe that the security services of both the United States and the United Kingdom have attempted – both then and now – to subvert the significance of what occurred at RAF Bentwaters by the use of well-practised methods of disinformation.’
The six former U.S. Air Force officers and one former enlisted man, are to present declassified information which they claim backs up their findings. They have witness testimony from 120 former or retired military personnel which points to alien intervention at nuclear sites in the U.S. as recently as 2003.
They will urge the authorities to confirm that alien beings have long been visiting Earth.
A press conference today in Washington will also highlight testimony from retired U.S. Air Force Captain Bruce Fenstermacher, whose security team saw a cigar-shaped UFO hovering above FE Warren nuclear base in Wyoming in 1976.
Read more: www.dailymail.co.uk
WHO: – Look at these credentials!:
Dwynne Arneson, USAF Lt.Col. Ret., communications center officer-in-charge
Bruce Fenstermacher, former USAF nuclear missile launch officer
Charles Halt, USAF Col. Ret., former deputy base commander
Robert Hastings, researcher and author
Robert Jamison, former USAF nuclear missile targeting officer
Patrick McDonough, former USAF nuclear missile site geodetic surveyor
Jerome Nelson, former USAF nuclear missile launch officer
Robert Salas, former USAF nuclear missile launch officer
WHAT:
Noted researcher Robert Hastings, author of UFOs and Nukes: Extraordinary Encounters at Nuclear Weapons Sites, will moderate a distinguished panel of former U.S. Air Force officers involved in UFO incidents at nuclear missile sites near Malmstrom, F.E. Warren, and Walker AFBs, as well as the nuclear weapons depot at RAF Bentwaters.
WHEN:
Monday, September 27, 2010, 12:30 p.m
WHERE:
National Press Club, Holeman Lounge
Event open to credentialed media and Congressional staff only

Leave your comments below and visit debate on our forum!
.
Your opinion?