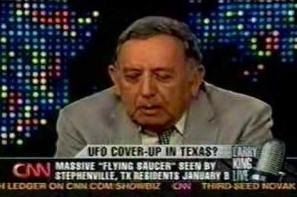 Retired Air Force captain Robert Salas has written a book (Faded Giant – link), appeared at the National Press Club, and spoken to worldwide TV audiences about the day UFOs took 10 nuclear missiles offline in 1967. He’ll join other military veterans for another press conference in Washington on Monday, even though he doubts the media’s ability to handle the story.

September 22, 2010 – Retired Air Force captain Robert Salas insists he’s “not as naive as I used to be” back in 2001, the first time he shared his eyewitness account with a National Press Club audience about how UFOs disabled an ICBM missile field in 1967. He erroneously assumed the mainstream media might actually be curious about how America’s nuclear arsenal could be so easily breached.
But speaking out nine years ago wasn’t a total loss, considering how his example emboldened other former USAF operatives like Bruce Fenstermacher — a Minuteman III launch control officer in the Seventies — to step up with their own stories about UFOs snooping around Uncle Sam’s WMDs. On Monday afternoon, Fenstermacher will join Salas and five more veterans at the same venue in yet another (probably doomed) effort to stoke a little interest in our strategic vulnerabilities. All told, UFOs and Nukes author/event organizer Robert Hastings has vetted well over 115 veterans with individual pieces of this disturbing puzzle.
Salas, whose story is also cited in Leslie Kean’s compelling New York Times bestseller UFOs: Generals, Pilots and Government Officials Go On the Record, says he has “no high expectations” for this event, either. Nor does he share any of Kean’s enthusiasm for jump-starting a new scientific study of the Great Taboo.
“Unless our government comes forward and makes an official statement that this phenomenon is real, that there’s something to it, there’s just no way we’re going to generate political support for a new study,” Salas says.
Read more: devoid.blogs.heraldtribune.com

Go, Figure out, and identify UFO