Latest UFO sightings -This UFO photos were taken in Broomfield, Colorado on 11th and 25th September 2010.
Witness report: I had two sightings in September. One was on Saturday the 11th I think, and it was a singular small white UFO identical to the one sighted in Broomfield the 9th.
There was another one somewhere inbetween, but it did not photograph well against the sun and clouds, but its visible.
The next one was on the 25th, and I saw a jet flying overhead that was almost directly overhead, and had a significant contrail. Next to it was a white silvery small UFO. In a picture of the UFO that I took after the jet passed, there was a streak in the picture. Its a 14 MP camera so I blew it up. After inverting the image it looked like a rod. I emailed it to a friend and they enhanced it. The Rod points directly at the UFO. Curious. The UFO turned out to be two, and one was really shimmering and pulsating unlike a balloon.
Might just be a coincidence, but keepin my eyes on the skies here. these are just samples. I have many more shots.
Author: Bob
source: submitted to www.Latest-UFO-Sightings.net 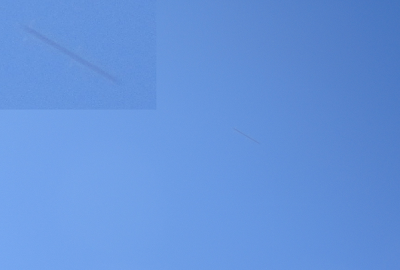 Somerset County Cigar-Shaped UFO Was Photographed By A Trucker

Cylinder-shaped object over Florida, US