Latest UFO sightings – This UFO video and photos were taken by the owner of tardonplo.blogspot.com in Prague, Czech Republic on 9th September 2010. Please leave your comments on this one!
Witness report: I was in Prague last Thursday (September 9), and while walking around I chanced to a square near the river where this building stands on the left side – quite spectacular even in daylight. It was half past 9 and already dark, with cool breezy wind.
When I looked over to the other bank of the river, first I thought I glimpsed three lights of a passenger airplane just over the river, maybe 50-60 meters up, trying to gain altitude towards my direction. When I looked again as it was quite unbelievable, I saw that it was three lights flying on different paths over the river, quite slowly, as one paddles in the canoe under the motionless sky and in quiet so as not to disturb the water. The three lights were dark orange and did not change in color or intensity, did not waver, but were steady all the way as I saw them.
They were moving into my direction over the river without changing altitude and so slow that I realized it was not an airplane or chopper or rocket. They did not make any noise either. From that distance, which was a couple of hundred meters now, no noise came, only the nonreflecting light of the objects. Apparently there was no body around them to reflect their light, and it was as if they were spheres as they emitted with the same intensity all the time I had my eyes on them, even when they flew over me.
When arriving above the East bank of the river, one of the lights changed its eastbound course to north-north east, and the two other followed. Then they slowly flew over the buildings, and disappeared from sight without a sound.
I then looked towards Pražský Hrad, sitting grandly atop the hill, and saw another yellow light emerging from behind the castle. In half a minute, a second one appeared. Both flew in the same eastern direction, slowly as the three before them, as if casually drifting towards a meeting point.
The time elapsed between taking the below images was 3 seconds each. The lights were approximately 40-50 meters high, below the base of clouds. It is easy to grasp how slow they flew that it took them more than 6 seconds to cover the distance towards the building captured in the photo.
I don’t know what these things were, but it was quite a sight! It would be very attractive to pull this trick over Budapest, too.
Author: Molnar S. (tardonplo.blogspot.com)
submitted to www.Latest-UFO-Sightings.net 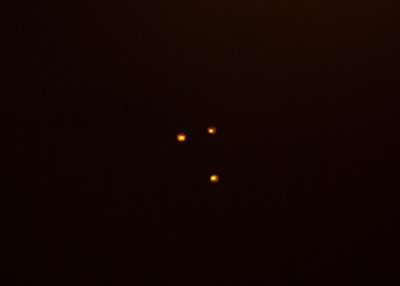 Unknown lights in triangle formation in the night sky over Manchester, UK 23- Nov-2010