This UFO photos were submitted to me a few days ago, they were taken in Toronto, Canada during the International Air show on 28th August 2010.
Witness report: My partner and I have now lived in our 36 floor condo for almost 2 years. We have the most amazing view of the Toronto Skyline and beyond. Our view reaching as far as the eye can see. We can see to the other side of Lake Ontario. We can see over 100 kms away. It is amazing to see all the big planes fly into Pearson International Air Port which is about 30 plus kms away. We watch the Toronto International AIr show every year. I even photo graph it. I can see the planes fly around the city sky. My uncle was an avid pilot and i have flown with him many times. We have a really great understanding of the planes and objects flying around in our sky and how far away they are as well. We have watched for years the same flight paths of commercial and private flights around Toronto. Porter Airlines ! as well we can see take off and a land.
So this August night well studying the cloudless sky and admiring how grey pink it was i noticed something flying in the sky, put not in a normal flight path. I have photographed the skyline and sunsets for now almost two years and this caught my eye. First of all I was excited for I was hoping it was jets practicing or getting ready for the air show. hmmm, not at sunset, and not flying in this direction. I was able to see the air show for when the G20 and G8 Summits where in Toronto and Huntsville, Ontario.
What I saw at first was this object flying from the west, flying to towards north Toronto. I was past Pearson Air Port and was not flying to high in the sky. I studied the object which I noticed became to objects. At first I thought Fighter Jets. They where flying in a tight formation, like the Snow Birds or Blue Angles would in a fly by. So I called my partner to come and look at the jets. He comes running at the same time I run to get my camera. I must say I have a have decent camera. A Canon Rebel, shoots great. As I make it to the balcony my eyes cant believe what I am seeing. The object now below the main jet like looking object as an object that is now clear and looks like to objects. Wait!! 3 Jets!! No!!! one!! the other was smaller and had to black blurish objects visible. The object had two round circles that looked like some type of heat emissions where coming out of them, like how it would look on hot summer day on a highway, with the heat rising up. Weird. The! other jet then turn north and flew in a different direction fast, with out sound. By this time I was just about to start shooting my pictures. It was hard to find and focus fast, but tried my best and got this.
It looked like a 2 black circles on top very closely placed together with a 3 black circle much more larger attached below it, but attached with a thin black line. I would say it almost looks just like the tail end of a jet engine. Like someone erased the entire jet but left the engine hole at the end showing. My partner and I both saw this.
Author: Scott M.
source: submitted to www.Latest-UFO-Sightings.net 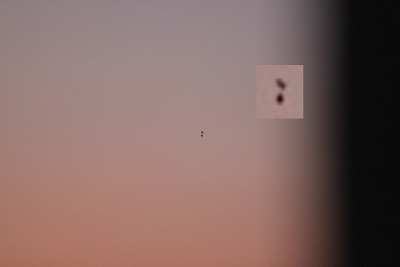