The dictionary states that a UFO is “an unidentified flying object; an object seen in the sky that people cannot explain.” Will we ever really know what they are or where they come from? Is the government really keeping secrets from us regarding UFO activity? Are the stories told actually true or are they a fabricated hoax? Decide for yourself.
Sept 19, 1961- Barney and Betty Hill from New Hampshire were driving along U.S. Route 3 around midnight when Betty saw something in the night sky. It was a bright light that seemed to do all kinds of maneuvers in the sky above them and looked like it was following their car. The couple had no other recollection of the incident and did not know until under hypnosis that they had lost two hours of time. They were hypnotized separately nearly two years later and what was reveled was shocking. They both told a very detailed and eerie account of being abducted by aliens. There was a book written about the events and in 1975 the movie “The UFO Incident” was shown on television.
Mid-1980s-A retired high-ranking U.S. Air Force official told a group of close friends that the U.S. conducted secret experiments on people using low-flying aircrafts that look like flying saucers. They would make the unwilling participants forget their experience by the use of hypnosis. Shocking! 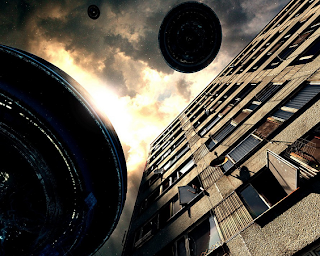 April 19, 1984- Air traffic controllers saw something they could not believe as they instructed a plane to land at 4:00pm that fateful day. They were instructing a small plane to land on runway 22, when they saw a bright light zooming down towards runway 27. It went at a lightning speed, touched down then flew straight up and away. It was never explained.

1991-1993- The British government analyzed classified files under the “UFO Project” and could not rule out the possibility of extraterrestrial life being the cause of some of these sightings. 8,000 pages were later released that told of military and public reports of UFO activity all over the world.
March 25,2011- It still goes on today. Local residents caught on tape a triangular formation of red light hovering in the sky over Lafayette, Colorado. The media immediately started broadcasting the video online and on television. They’re Back!
There are even references to life out there beyond our world in “The Bible”. Psalm 104:4 ……”makes his angels spirits.” And in Ephesians 6:12-…..”Evil spirits in the heavenly places.”…..2 Corinthians 11:14….Satan can turn “into an angel of light.” Cannot the creator of the heaven and the earth, put life on other planets, as well?
For more information check out the book “The Little White Book of Light” featuring columns by Wright Way.
www.Latest-UFO-Sightings.net (c) 2011
Your opinion?