Latest UFO sighting recorded this Monday (21st December 2009) over Shrewsbury (Shropshire landmark), UK.
“UFO investigators claim to have captured video evidence of a strange triangular shaped craft with pulsing lights flying in the skies above a Shropshire landmark.
Phil Hoyle and Peter Jones, of the Shrewsbury-based UFO Investigations & Research Unit, conducted a sky watch on Monday as they claim the winter solstice is also one of the most active evenings for UFO sightings globally.
Mr Hoyle, and other witnesses who all claim to have had UFO encounters, say they saw a large triangle near The Wrekin for more than 10 minutes. He said he believed no military aircraft were being used at the time about 9.22pm.
Mr Hoyle said the footage of the UFO was captured from the top of Lyth Hill, near Shrewsbury, in the direction of The Wrekin. He estimated the craft to be about four miles away.
He said: “The triangle was caught on a night vision video and it can be clearly seen that it is not a conventional aircraft.
“We could see three large pulsating white lights at each corner with a smaller one in the middle of the object, which is typical of these UFO craft. I also received a number of orange sphere reports from the Newport area.
“On the same date in 2003 we witnessed over 20 unknowns across the Wrekin and north Shropshire, we checked all surrounding civil and military bases and they had no flights at that time.”
Mr Hoyle said the observation times for a UFO sighting had been predicted by a computer programme created by Roy Dutton, a retired British Aerospace scientist. Mr Dutton has developed a system which is claimed can predict times and places most likely for increased UFO activity. Mr Hoyle said The Wrekin was a hotspot for UFO activity.”
Source: www.shropshirestar.com 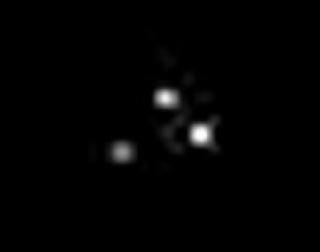