Latest UFO sighting – A British stargazer has taken an amazing video of a UFO crossing the face of the sun. 1st February 2010. 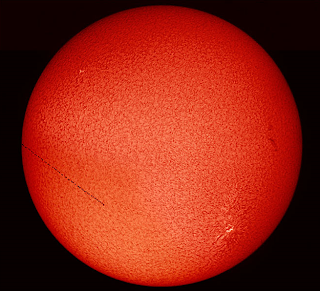 Malcolm Park was taking a series of photos of the huge star through a specially filtered telescope when a strange object began to drift across it.
Malcolm, of South West London, said: “I was recording activity on the sun when I caught this strange encounter. It looks like an irregularly-shaped lump of rock and is clearly rotating very quickly.
“I wondered if what I captured was a piece of space junk or, with the way it was tumbling, a small asteroid.”
Malcolm said he had ruled out the possibility of a plane or a bird because of the strange shape and absence of any wings.
Robin Scagell, vice-president of the UK’s Society for Popular Astronomy, said: “This is a fascinating observation – and a genuine unidentified flying object as no one knows for sure what it is.
“My guess is that it might be a party deflated weather balloon high in the atmosphere – but we don’t really know.”
Mr Scagell warned that no one should attempt to look directly at the sun except with proper professional filters or risk being blinded.
Source: http://www.thesun.co.uk/sol/homepage/news/2834314/Sun-sational-UFO-spotted.html#ixzz0eYxGcSOI
Recent UFO sightings, new video footage, ovni, nlo, nlp, space.