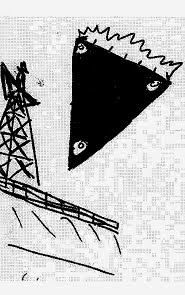 Super-fast spacecraft and a giant, humming triangle hovering above the house of Michael Howard, the former Home Secretary, feature in the latest release of UFO-related files at the Public Records Office.
Almost 6,000 pages of declassified files are released online today, the majority covering 1994 to 2000. Many sightings contained crude drawings.
Among the most puzzling of reports listed was an object tracked moving at more than 1,000 knots by Prestwick airport in 1999. Equally mystifying were UFO sightings by police over the North Sea near Lincolnshire, and a British Airways 737 that reported a near-miss with a mysterious object in January 1995, while there were more than 600 reported sightings of unexplained objects over what was dubbed the “Bonnybridge Triangle” in Scotland between 1995 and 1997.
Alongside reports of unexplained lights or mysterious craft, some witnesses claim to have had direct interaction with UFOs.
In one unexplained episode from 27th January 27, 1997, South Wales Police reported claims of a UFO encounter by a driver in Ebbw Vale. The man claimed that his car was enveloped in a “tube of light” which hovered over it for five minutes. During this time his radio and mobile phone ceased to work. The report said the man’s car was left covered in “dust and dirt”.

The report goes on: “He felt and was indeed sick later on. He is still feeling ill today [28/1/97] and has developed a skin condition. Advised to see doctor.”
In March 1997 a man in Kingstanding, Birmingham, reported a 200ft triangle over his back garden. The hovering object caused dogs to bark, he said, before accelerating into the sky. It left a “silky white substance” on garden trees which the man collected in a jam jar. What became of the jam jar’s contents is not reported.
Several people reported a triangular, “humming” UFO near Mr Howard’s home in Kent on March 8, 1997.
The incident provoked government correspondence, local newspaper reports and an RAF investigation. MoD correspondence concluded: “Although the MoD has received reports of an alleged ‘UFO’ sighting near Michael Howard’s home on March 8, 1997, MoD Air Defence staff have confirmed that there is no evidence to suggest any unauthorised incursion of the UK Air Defence Region on that date.” 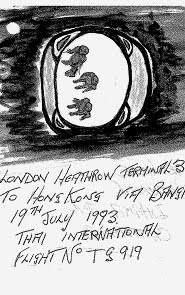 David Clarke, a consultant on the new files from Sheffield Hallam University, noted that UFOs had altered over time, from cigar-shaped objects to flying saucers to triangles reminiscent of The X-Files. He said: “I think either aliens are watching our telly and adapting their aircraft accordingly or people are seeing these things in popular culture and adapting them in their own imagination.”
Dr Clarke said that some UFO reports defied conventional explanation but suggested that they were more likely to be unknown natural phenomena than alien craft.
Amongst the files released yesterday are several references to camera footage shot by RAF fighters in the 1950s which shows strange balls of fire or plasma near aircraft that the Ministry of Defence and meteorological officials could not explain. However, the footage has since been mysteriously lost. 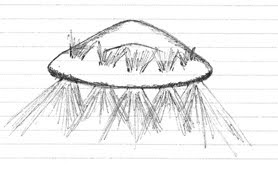 Video: Dr David Clarke, an expert in UFO history, guides us through the highlights of the UFO files at The National Archives, released in February 2010.