On May 13, 2004 Jaime Maussan (right photo) released his interview of Mexican Air Force pilots showing an infrared video footage from a military air patrol on March 5, 2004 against drug smuggling, that shows at least 11 very hot “spheres” moving irregularly with apparent great speed. Location: Over Campeche state, Mexico. The objects could not be seen with the naked eye, neither the crew on board nor ground personnel confirmed any radar contact with the objects in question. The crew did however pick up an earlier radar contact of an object moving at 60 mph which was later described as a lonely truck on the highway below which has been located to the front of the two engine Merlin C26A aircraft whereas the infrared targets were picked up through a dome mounted IR-system a little later at abt. -130° azimuth relative to the aircraft’s flight direction in its 8 o’clock position.
Skeptics 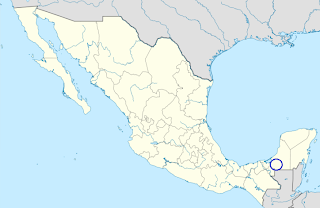 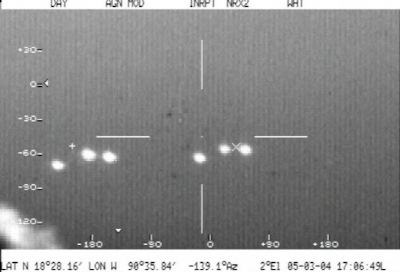 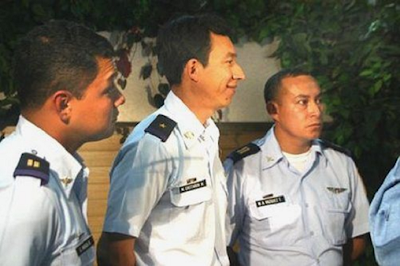 Summary:
On April 20, 2004, Mexican UFO investigator and television personality Jaime Maussan was summoned by Mexico’s Department of Defense to a private meeting to discuss a matter of national importance. Maussan met with General Clemente Vega Garcia, Secretary of Defense, and other members of his staff. Maussan was informed that on March 5, an extraordinary incident took place in the skies over Ciudad del Carmen, Campeche.
Anti-Narcotics Operation:
A Mexican Air Force Merlin C26A bi-motor airplance was performing routine duties to detect drug smuggling airplanes, in a anti-narcotics operation. The plane had a high-tech FLIR STAR ZAPPHIR II and a RADAR AN/PS 143 BRAVO VICTOR 3, which implements infrared video. Mayor Magdaleno Jasso Núñez was the commander of the plane, Lt. Mario Adrian Vasquez was FLIR operator, and Lt. German Ramirez was radar operator-all three were members of the 501 Aerial Squadron.
Unknown Target Detected: 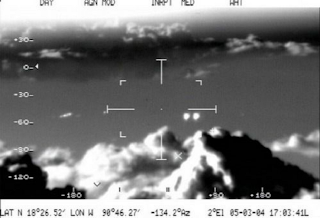 The plane was not a combat plane-its mission was to detect planes without flight plans, and report their find to base headquarters, where combat planes would be scrambled to encounter the smugglers. At 17:00 hours, the Merlin detected unknown traffic at 10,500 feet over Ciudad del Carmen. The plane then flew closer to the unknown target to record it with their equipment. They reported their unknown target to base. (right picture: Frame from FLIR infrared video camera of objects flying near plane. Click for enlarge.)
UFO Follows Plane:
The Merlin’s radar was painting the object, and the infrared cameras were filming it. The Merlin attempted to move closer yet for a visual confirmation, but as it did, the unknown target made a surprise maneuver, and flew away at great speed. The entire event was being recorded, and the details were being reported as they occurred to base. Without warning, the unknown object suddenly reappeared, and began following the Merlin.
No Visual Contact:
In a moment, the Merlin’s radar was now seeing two objects, but there had still been no visual contact. The crew became alarmed because they could not make a maneuver that would enable a visual confirmation of the unknown objects. In a minute or two, there would be nine more objects , which seemed to come from out of nowhere. In another unexpected move, the eleven unknown objects were now circling the Merlin.
Full Investigation Ordered:
Though close enough to see the unknowns, the crew aboard the Merlin stated the objects must have been invisible. After some stressful moments, suddenly the eleven UFOs were gone-nowhere to be seen or recorded on camera. The Merlin returned to the Air Force base, and Jasso prepared a full report on the incident. After the Secretary of the Defense read Jasso’s report, he ordered a full investigation into the incident.
Air Force Freely Releases Information:
On April 22, 2004, General Clemente Vega, Secretary of Defense contacted Maussan and his research team, and turned over all of the tapes and information collected by the Merlin. In a rare move, the Mexican military declared that they were open to discuss and evaluate the sighting of the UFOs without suppressing any information from the public. This collaboration between the military and the general public had its beginnings during the Mexico UFO Wave of 1991.
Infrared Video of UFOs:
The extraordinary FLIR video of the eleven unknown objects flying over Campeche became news all over the world. UFO investigators were thrilled to finally have solid, undeniable evidence of the existence of UFOs flying over our skies. The UFO video was freely shared over the Internet, and discussed on many UFO web sites, and forums.
Solid Proof:
The debunkers would get in their two-cents worth, claiming that the glowing objects recorded by the camera of the Merlin plane were nothing more than oil field fires bouncing off of the clouds. This explanation has been accepted by some, but many hold to the film as solid proof of UFOs.
sources:
wikipedia.org
www.ufoevidence.org
ufos.about.com
www.youtube.com

Mexico Ufo Encounter 11 UFO’s The most famous sighting ever! Original footage.
This footage was filmed in 2004 over mexico by military personnel who were looking for drug smugglers flying private planes they thought they had something when this happened, they managed to capture on film this amazing encounter with upto 11 ufo’s whilst flying in there aircraft, this footage has since become very famous and mexico even came out to the public and admitted the story was very true and are now taking the ufo issue very seriously. The footage speaks for itself!

Jaime Maussan – UFO Conference 2005
Note: All 10 parts are avaliable in this player.