Latest UFO sightings – Strange objects were recorded in a no fly zone in  the sky over London, UK during volcanic ash on Friday and Saturday (16th & 17th April 2010). 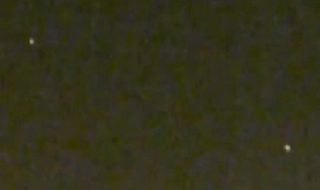 1st part; Friday, 16th April 2010
I had my eyes on the skies tonight and I noticed a couple of strange objects. The first one you see I thought was a star but it was the only one visible in the night sky which I thought was unusual. The second is an object floating across the city which then seems to fade away. The odd thing about all this is that tonight is a no fly zone in London because of the Volcanic ash coming over from Iceland. My guess is that the first object is bright star and the second could be a Chinese lantern perhaps?
UPDATE: I have now been informed that what I thought was a bright star is actually Venus. I am still unsure about the second object I seen but tonight I seen two more of them, I am uploading the video now.
2nd part; Saturday, 17th April 2010
For the second night running I have seen objects in the sky. I captured these two spheres. Interestingly these two objects appeared in almost exactly the same place as yesterday.
Author – Kevin A.