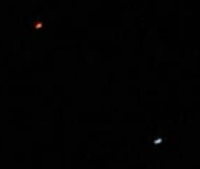 UFO Orange Orbs footage taken Merseyside, England.
These Orange Orbs were seen flying over Merseyside at 10.30pm on 2nd April 2010.
There were 8 Orbs in Total and flew to a point where they then disappeared, they were silent and about the size of a plane, maybe even bigger.
There were also what looked like a star in the sky, which had strange lighting colours, ie: Blue/Reed/White and Green, and flickered near and close to the Orbs- No other stars were doing this.
We took Photographs which are at the start of this footage, showing you both the Orbs and Star in question, then it goes into the footage- Close up footage, slighty out of focus, then footage further away so you can actually see the Orb Moving.
Thought it was a possible Lantern show, BUT my theory is that the lanterns would have been a whole lot smaller as looking at the object it would have been about the size of a plane.
Therfore its un-explainable.
Author (dannylampkin @ youtube)