Tuesday, 11 May 2010 – MYSTERY continues to surround a strange object photographed in the sky above Scarborough, UK.

As reported in the Evening News last week, Andrew was photographing Basics Plus director Avis Turner at Betton Farm, shooting four frames a second. The mystery object appears in just one frame and appears in no other photo, or in any other taken at the same time around Betton Farm. No aircraft were seen or heard. The small black spots on the photo are dust on the camera sensor.
Evening News reader Russ Kellett has come forward after seeing the image and said he believed the object could well be a UFO.
Mr Kellett, who is vice-chairman of the British Flying Saucer Bureau, said: “When I first saw the picture I thought it was a fighter jet banking to the right, but the problem is that the object looks to have three parts to it.
“There seems to be a main fuselage and then two spheres either side of that and the sphere on the bottom seems to be blocking out the electricity cable.
“It can’t be a trick of the light because it is covering the overhead cable and the object appears to be almost the length of the car that is also in the photo.”
Mr Kellett added Filey will host its first UFO conference next month to coincide with the start of the Filey Town Festival.
The Flying Saucers Have Landed event takes place on Saturday June 26 and Sunday June 27.
The mystery object photographed by Andrew Higgins zooming behind Avis Turner at Basics Plus, at Betton Farm, East Ayton, and shown in close-up below.
source: www.scarborougheveningnews.co.uk
LUS 2010, most recent latest UFO sightings reports and evidences. Real UFOs on net Europe, daytime ovni England 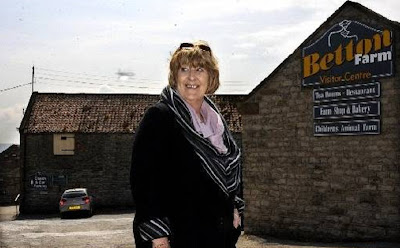 The mystery object behind Avis Turner from Basics Plus
Click on the photos to enlarge!
Your opinion?

Strange object recorded from the plane