After UFO Disclosure by UK, Denmark, Sweden, Uruguay, Russia, and New Zealand government publishing its own x-files in public domain in next few weeks. And CIA disclosure document revealing that DIA Remote Viewers ‘saw’ Extraterrestrial on Saturn moon Titan.
Now the Italian EU MP Mario Borghezio on 14 June 2010, had tabled a written statement. In it he calls on member of states to disclosure the documents relating to UFOs.
According to document :
1. Considers it essential to set up a scientific center for the analysis and dissemination of the scientific data gathered to date by various European bodies and governments;
2. Calls for public archives on UFOs to be opened up and for records to be declassified by the Member States, thus providing the public and the mass media with access to the full range of documentation on the subject;
3. Instructs its President to forward this declaration, together with the names of the signatories, to the Council, the Commission and the governments of the Member States.
So far 17 EU members have signed the statement. Disclosure request document had received the signatures of the majority of the EU Parliament.
The written statement P7_DCL (2010) 0057 also indicates that the UFOs are a major safety problem and further states that in the 33rd United Nations General Assembly in 1978 it was formally recognized as well.
According to UFO disclosure request document UFO sighting data collected by the Member States could “important scientific and technological impact” entail.
Therefore urge the signatories not just “the opening of state archives on UFOs and the lifting of secrecy”, but also propose the establishment of a scientific UFO observatory.
Down-below is EU Parliament UFO Disclosure Request Document (click on the photos to enlarge): 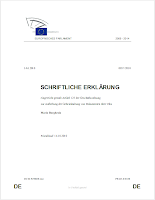