Stoney Littleton Long Barrow, Nr Wellow. Somerset
A new crop picture at Stony Littleton Longbarrow on June 7, 2010 shows their usual symbols for Rarth and Moon, along with past symbols for a bright comet.
Have any comets become much brighter lately as seen from Earth? Yes, indeed! As reported by Spaceweather on the same day that crop picture appeared, Comet McNaught C/2009 R1 has become much brighter within the past few weeks as it moves toward the Sun (see www.spaceweather.com of June 7 or 8, 2010). It may become even brighter towards the end of June as it approaches perihelion 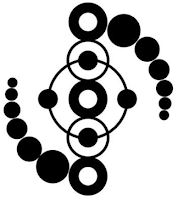 The formations positioned next to Stony Littleton Long Barrow add significance to the whole event. With the timeline clearly seen at this location spanning from ancient times to the impact of this present and unexpected set of circles. Unexpected also because this is the first time a formation has appeared at this location.
The location high on the hillside overlooking a quiet valley close to the Roman City of Bath is quite stunning. The Chamber Barrow of Stony Littleton is one of the finest Burial Chambers in Britain. Thought to be around 5000 years old, it resides in a remote location, cut off from the hectic 21st century. Perhaps one of the most amazing locations I have had the pleasure to visit, and yet only 40 minutes from my own home.
The formation is located right next to the ancient mound. The crop remains a mystery at the moment, as its very short, but however does have a yellow flower. At first glance we thought it was Old Canola, as most of the Canola fields are losing their flowers at this stage. It is only 3ft in height with a much narrow stem than Canola.
The crop inside had an extremely neat floor pattern, with minimal breakage.
There is no tramlines really but I think we are talking about a formation of 200/250 feet long. It’s on a hill and it is slightly curved. 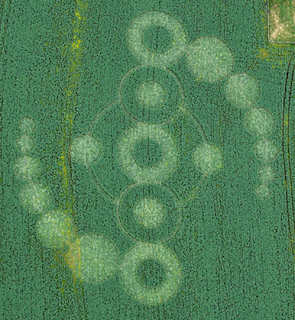 As we arrived, Monday 7th around 7 pm, rain started again so that the photos are what they are? What was very interesting is the proximity of this Longbarrow unknown by the majority of people. Wayland Smithy is known for having 2 chambers whilst West Kennett Longbarrow has got 4 chambers, this one has no less than 6 chambers and measures around 15/20 meters long. So once again, the circle makers are leading us to ancient monuments and the knowledge that goes with.
The crop circle is just facing the entrance slightly left no more far than 50 m. The second surprise is that it is not rape seed although there are a few rogue rape seed blown in from other fields, which can lead to some confusion at first. This crop is bean ! (see photo). The lay is very flattened and seems quite fragile, not sure it will lift up again later. Nonetheless the swirls on the ground are off center and beautiful. I guess the flattened aspect will give a good contrast from the air.
The entrance of the barrow is pointing south east, so aerial landscapes photos (if sunny) should be better around mid-day (for a better contrast) or eventually the morning. 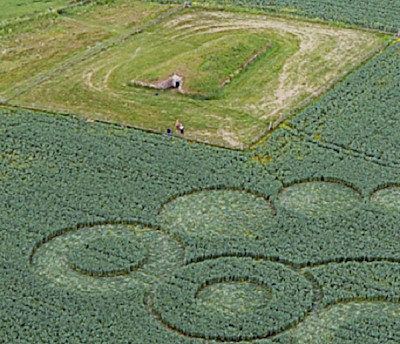 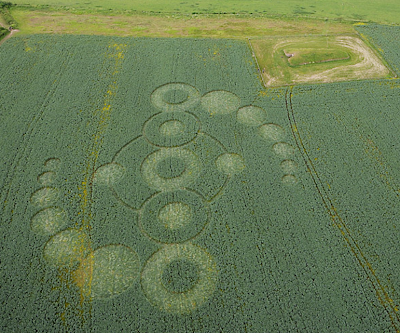 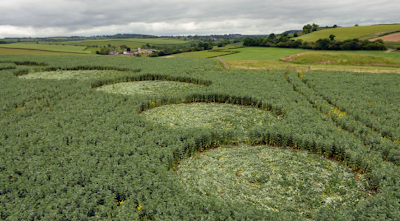