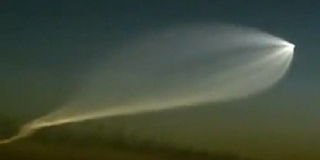 Latest UFO sightings – Footage of the Kazakhstan UFO – Wednesday, 30th June 2010.
Report from RT: On Wednesday night in the sky over the capital city of Bishkek, Kyrgyzstan appeared an unidentified flying object, which later disappeared in a bright flash. Experts in the space industry was assured that this incident has nothing to do with the launch of a rocket Baikonur. According to eyewitnesses, the UFO remotely resembled a comet. He moved, leaving behind a glowing trail in the sky, reports RIA Novosti . After some time, an explosion, and on-site by an unknown object have only a silver cloud. It can be observed with the naked eye for about an hour. Note that the unusual phenomenon coincided with the launch from the Baikonur Cosmodrome in Kazakhstan, the carrier rocket Soyuz-U. It must deliver to orbit cargo ship Progress M-06M ” . According to experts, the appearance of UFOs over Bishkek and missile launch does not interconnected.

Another footage of triangle formation, this time from Israel