This email came to me a few days ago with a photo by a guy named Mervyn (click on the picture to enlarge!):
“happen recently on 17 jul 2011 in tuaran beach resort kota kinabalu sabah malaysia. witnessed by many holiday goers.” 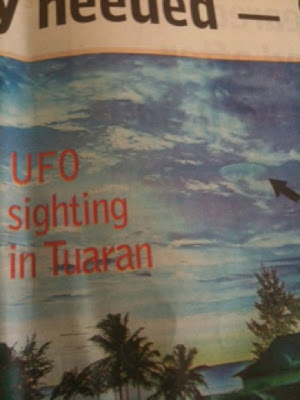 And today I found an article about this sighting with a little more info: 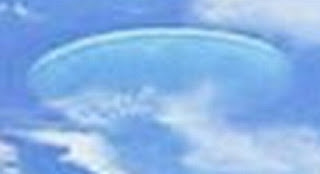 The round blue object, which was said to be hovering in the sky near the Tuaran Beach Resort, was sighted by resort guests and employees.
Tuaran Beach Resort restaurant manager, James Dungil, 27, who were among the eyewitnesses said the object was sighted on Saturday around 4pm.
“I was in the restaurant with some friends and saw some guests pointing up to the sky.
“We were curious so we went out to see what the commotion was all about and I saw a round transparent object in the sky,” he said when contacted yesterday.
James said he and some others then ran up to the resort’s family living room, located on the second floor, to have a better view.
“I managed to take one photo before it disappeared out of sight,” he said, adding that there was no sound or shining light when the object vanished.
Several other guests and employees, who claimed to have also spotted the object, said it hovered in the air for a few minutes before disappearing.
Some even claimed that their handphones “went dead” when they tried to record the object with the devices.
Another witness, Donny Benedict, 29, said he did not believe in the existence of UFOs, but changed his mind upon watching the unusual sight.
“I saw the object for about 20 seconds before it disappeared.
“It’s strange that it did not make any noise like a normal aircraft,” he said, adding that he regretted not being able to take a picture of the object with his handphone as it was out of battery.
Claims of UFO sighting were also made in Hangzhou, China on July 7, forcing an airport to cease operations for one hour.
A flight crew preparing for descend first detected the object around 8.40pm and notified the air traffic control department.
Aviation authorities responded within minutes, grounding outbound flights and diverting inbound ones to airports in Ningbo and Wuxi.
Eighteen flights were affected. Though normal operations resumed an hour later, the incident captured the attention of the Chinese media and sparked a firestorm of speculation on the UFO’s identity.
Internet users claimed that the object was a US bomber flying towards China but it was neither a US missile nor a Russian satellite.
Some even suggested that the Chinese military was responsible for the UFO; a new missile or aircraft being tested out.
source: www.theborneopost.com
Your opinion?