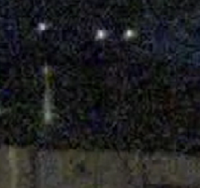 Latest UFO sightings – Video of three unknown lights (triangle UFO)  in the sky over Saltney, Flintshire taken from security camera on Friday, 16th July 2010 at 10:23pm. Planes at nearby Broughton airfield don’t fly at night.
Witness report: We have two cameras watching vehicles parked in our compound, and we noticed on three pieces of the footage some strange lights in the sky just visible above one of the buildings opposite.
It shows firstly what looks like an after burner from an aircraft but three-pointed. We accepted this as an aircraft but one minute later there is a group of three, then after a minute another one.
Author: S.
source: submitted to www.Latest-UFO-Sightings.net
Your opinion?