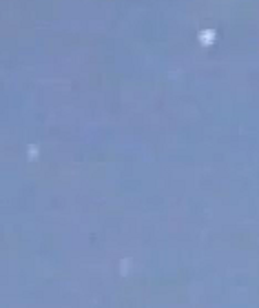 Latest UFO sightings – UFO activity recorded over Western Pennsylvania on Saturday, 10th July 2010.
Witness report: REOCCURRING SIGHTING! Filmed from North Irwin, PA by fellow local skywatcher energeeeresearch, this reoccurring “fake star” is seen regularly at twilight over area located in several different directions from him–INCLUDING MURRYSVILLE. We believe this is the source of all the UFOs seen here. First noticed by him early last summer–it is active again this year–noticed by him since May 20th (because it stays light longer & it sticks out in sky). He doesn’t film it every time he sees it. I’ll make a compilation with the footage he’s got soon.
With binoculars, a thin, white streak that he said looks “like lightening” can be seen sticking out of bottom of object until it “poofs”. I hope to catch it on video with IR filters & HD cam soon….like tonight.
In fact, Speilberg & Michael Bay people who are filming an ALIEN movie (“I AM Number Four”) at Franklin Regional High School in Murrysville tonight should sent someone out to try & film it too (between 8-9pm usually) & put it in their movie! Now how cool would that be–REAL aliens in an alien movie…
Later, Rekon7 met with guys from Kentucky & Ohio who are part of AfterDark Paranormal Investigations, who were in the area to meet with John Ventre, the PA State MUFON Director in nearby Greensburg. Let’s just say, they (one of which is a pilot) were impressed with the activity and will let John know it — And FYI, Ventre just asked me to organize a skywatch event the night before this year’s MUFON convention…
Oh yeah, a minister from SW PA east of Pittsburgh reported a daytime sighting on July 11th–maybe same type? (link)
Author (seeingUFOsPA @ youtube)
Part 1

UFO over powerplant in Pennsylvania