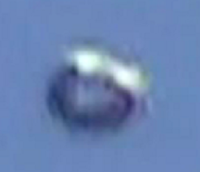 Latest UFO sightings – Interesting daytime footage of donut-shaped UFO was recorded today – Tuesday, 31st August 2010 in Glasgow, UK.
Witness report: I was just getting ready to film some heavy chemtrail activity when something caught my eye.
At first i thought ” it will be a plane, or something” but as i zoomed in on the object it certainly didnt appear to be a plane.
Now ppl will say its a balloon, or something, but not a ufo. But if thats the case, then why when i ran to the front of the house had the object disappeared? For 10 minutes i scanned the sky but that thing was gone, and aside from the chemtrails its an otherwise blue sky.
Defo unidentified – but thats not to say its alien.
Author (MrGlasgowtruther @ youtube)

What Are Aerial “Metallic Doughnuts” South of London, England? 24-Jun-2010 LINK
Your opinion?

Mystery object ‘neither a jet nor trick of light’

Strange object recorded from the plane