On October 27th, l996, Lajos Kosina was visiting his girlfriend’s parents’ house in the small village of Erpatak in the county of Szabolcs-Szatmar, Hungary.
Lajos’s girlfriend posed for one snapshot in her parents’ garden and no one noticed anything unusual in the sky at the time.
Upon having the photograph developed some weeks later, Lajos was surprised to see a disc-shaped object in the sky behind his girlfriend.
Although curious, they did not show the photograph in question to anyone for several months.
They were not really interested in it. Eventually, via a friend of the photographer, the photograph in question found its way to the Hungarian UFO Network (HUFON) who have conducted some preliminary research.
Further study of the photograph by HUFON revealed that the UFO was not blurred. To them, this indicated that it was either stationary or moving very slow, and was not a model being thrown through the air behind the young lady in the picture.
Having questioned the photographer, HUFON could find no evidence to support the idea that he may have hoaxed the photo.
HUFON researchers were left with the conclusion that this is a genuine UFO photograph, and that a real, flat, disc-shaped object, several meters in diameter, can be seen in the photo, the surface of which appears to reflect the autumn sunshine.
Photos taken by Lajos Kosina
By Laszlo Kiss & Philip Mantle
Laszlo Kiss is a Director of the Hungarian UFO Network.
Philip Mantle is the former Director of Investigations for the British UFO Research Association.
source: www.ufocasebook.com 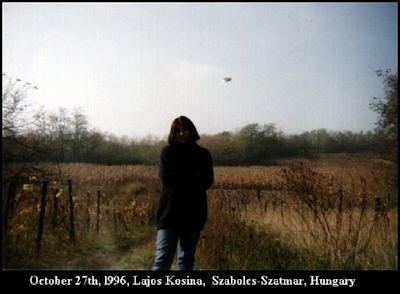