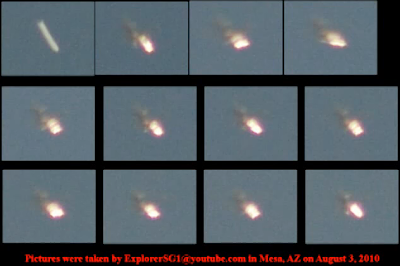 Witness report: On August 3, 2010 around 7:09PM in Mesa, AZ, I saw a lengthy flash of light in the North West that stayed in view for about 14 seconds while I was taking pictures of a jet. I took several pictures of the flash of light before it disappeared from my view. That light looked like a white/yellow color light with the intensity of a dim star.
Then about 11 minutes and 18 seconds later, I spotted a brilliant light similar to a bright star in the South West sky that just seem to just instantaneously appear in the sky not too far away from me. The color of the light appeared to be more of a lightest orange color with a hint of yellow in it. The light did flicker some but it mostly stay lit throughout my viewing. When I first spotted the object, I immediately started taking pictures of the UFO. It appeared to be very high up in the sky, and it was moving possibility at about the speed of a high altitude jet. I saw now contrails. In the beginning, the object did appeared to stay brightly lit, and it appeared to be flying in a straight path, but all that changed near the end of my picture session. At several points in the viewing, the object appeared to be move irrationally as in a sideway motion back and forth or a quick splurge in forward motion. It also appeared to be making a wide sweeping turn and at times a sudden change of direction to the right but still continue to stay on coarse westerly direction. Also towards the end of the sighting, the object began to appear varying in light intensity which eventually began to slowly dim to a point to which it appeared to vanished. I continued to take 3 to 5 more pictures after I lost visual contact with the object which those pictures shows that the object was still visible but only to the camera. That sighting lasted 6 minutes and 26 seconds.
Author (explorerSG1 @ youtube)

Triangle-shaped craft was recorded over Air Force Base in Tucson, Arizona 16-Aug-2010

Morphing UFOs recorded at sunset over Tucson in Arizona

Interesting footage of flying saucer was filmed in Tucson, Arizona