Latest UFO sightings – Strange photos of UFO flying in the night sky over Whittier, California on  Sunday, 1st August 2010 around 1 am.

Witness report: While chatting outdoors with a friend I spotted a lighted craft in the sky on a northbound heading coming in from the south. The craft traveled progressively nearer to our location while gaining altitude. The craft seemed odd per its considerable speed, lack of blinking lights and lack of sound. At approximately 0105HRS I retrieved my camera from my home while my friend remained outside to monitor the craft’s heading (approximately 30 seconds). At approximately 0106HRS the craft stopped its heading and began to accelerate immediately upward. My friend noticed a pendular motion to the craft that I am unable to confirm as I was staring at my camera’s display screen and attempting to secure as many photographs as possible before losing sight of it. The craft continued upward until it was no longer visible (approximately 0107HRS). I was able to secure some photographs but no video.
Note: The halo/tail effect in the photographs are due to my own hand movement.
Note: The color of the craft’s light captured in the photographs is accurate.
Note: The photographs have been resized (smaller) and trimmed after using the camera’s digital zoom feature to enhace definition of the craft. No other manipulation of the photographs has taken place.
Author: Joseph A.
source: submitted to www.Latest-UFO-Sightings.net 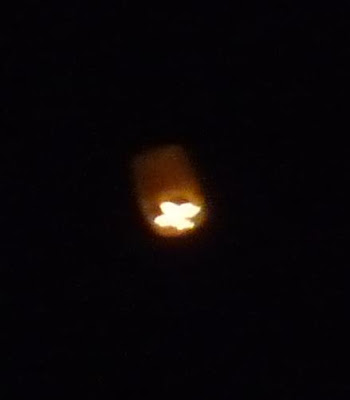 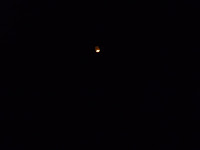 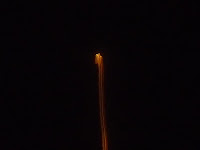