I found this two really interesting new articles at www.ufodigest.com:

A Possible Defense Against Alien Craft
Reptilian Aliens, Overlords of Human Abducting Aliens and Remote Viewing as UFO Defense
September 28, 2010 – by Paul Schroeder – I used to firmly believe that we as predators were at the very top of the food chain.
Then, others like me, who also claimed to be abductees, some of who I met through Budd Hopkins and his house get- togethers many years ago told me horror stories about some abductions.
They had seen onboard craft, a Mothman alien race, an ‘in-charge’ being who radiated rage and hatred.
This satanic, diabolical alien being was overlord of many alien races who abduct humans and who pilot UFOS.
.
Muscular, winged, sentient, highly technological, upright standing to seven feet tall, monitor lizards governed large craft; reptilians who looked upon us as we fancied veal violated our World’s airspace every night.
These abductees had even gleaned what reptoids regular diets consisted of..
Just as bad or even worse there was a spiritual/supernatural element, an ethereal placement of young reptilians along human abductees spinal chords for aural feasting; they could trespass interdimensionally as well and tamper with our energies that extended there also.
That explained why so many abductees had such horrid spinal issues; tampering with astral energies causes somatic injury.
Imagine a whole cityscape with most people walking around with an affixed juvenile reptilian attached upsidedown to their spines; it lends a new meaning to a silent invasion.
It was a chilling story I was to hear repeatedly echoed elsewhere.
It reframed correctly, at least to my mind, what the ulterior motive, purpose was behind many alien/mankind interaction/visitations.
And it angered me to think how blind UFO skywatchers and media are to simply focus attention and reporting on craft and not ever the intent of occupants within.
It puts one in mind of a Twilight Zone episode called,”To Serve Man”, which neatly summed up man’s importance in the galaxy as a mere condiment.
But you and I, reader, should not worry as our flesh is too tough, old and tainted with age.
It makes one want to change, to make an apparent moral decision and assume a vegetarian diet and not ever atavistically revert;
but we too have mouths intended by evolution, equipped with meat tearing incisors…..
Who could ever imagine such creatures ?
MY abduction recalls were of entities who were masters of illusions, ones who tested me in mind imposed scenarios of moral dilemmas and values choices.
They calibrated souls and assessed minds.
They were tall, white like a refrigerator, flat like a Gumby cartoon character and politely spoke mind to mind.
Read more: www.ufodigest.com
__________________________________________________________________
Are The Men-In-Black A Form Of UFO Terrorism?
The Men-In-Back, or MIBs, as they are frequently called, have appeared on the periphery of the UFO phenomenon since the late 1890s, when witnesses first began to suffer frightening visits from entities who threatened them in no uncertain terms to cease speaking about the unknown aerial phenomena they had seen. 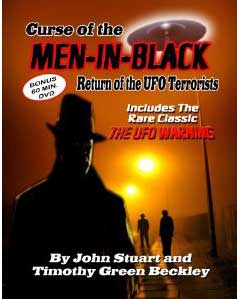 September 28, 2010 – By Sean Casteel – In a classic book on the subject, “The UFO Silencers: Mystery of the Men-In-Black,” by editor/publisher/writer Timothy Green Beckley, the story of an early close encounter is told. During the great airship flap of 1897, something strange and metallic fell from one of the passing UFOs. The witness who found it gave it to a local shopkeeper in the small nearby town in the American West for safekeeping. The shopkeeper was visited the very next day by a stranger in black who first offered to buy the strange material. When the shopkeeper refused to sell it, the MIB threatened to tie the shopkeeper to the whipping post and beat him.(To learn what happened next, one is advised to buy the book.)

According to Beckley, most people believe the MIB phenomena started in the 1950s with the experience of an early UFO researcher named Albert K. Bender. Bender is a story unto himself and worthy of some Googling to find out more. In any case, Bender capitulated to the MIBs who visited him and immediately gave up his UFO research efforts. But Beckley says the MIBs were driving black stagecoaches in the days before the black Cadillac had been invented and that even the famed 17thcentury witch hunter Cotton Mather was visited by a darkly dressed figure or two. If Beckley is right, then someone has been trying to repress some kind of vital truth for a very long time.
As is typical of the present day UFO phenomenon, there are numerous variations in the accounts of those who have had their doors darkened by the strong arm of whoever is behind the MIB presence. But it is consistently reported that the MIBs travel in groups of two or three, often in the aforementioned large black Cadillac, and that they are uniformly dressed in black suits and black hats.
From that point, the stories vary from witness to witness. Some report a tall blond man with handsome features accompanied by a smaller man who stares silently intently at the witnesses while his partner interrogates and intimidates. Other MIBs are said to have a ghastly pallor to their faces and be totally hairless, or in some cases to wear what is obviously an ill-fitting toupee under their black hat.
It has often been put forth that perhaps we are dealing with an alien attempt to appear human that falls far short of being the perfect disguise. It has been reported that an MIB, after displaying stiff, robotic movements, will suddenly seem drained of energy, as though some kind of internal battery has run out. An MIB may speak in a strange kind of monotone, which adds to the overall eeriness of the experience.
They sometimes speak in B-movie clichés. Say, for example, something like “We’ve got you dead to rights,” or “You and your family will be pushing up daisies if you go on with your UFO work.” It is theorized that the aliens are learning our language and culture by intercepting our television broadcasts out in space and that they genuinely believe those clichés are frightening to those who hear them. One would suppose that nearly anything they said WOULD be frightening in the context of the uninvited visit, but at some point a witness to an MIB surely must have asked, “Who writes this stuff?”
In any case, more than 50 years down the road from their first appearances, the mystery of the MIBs remains unsolved. We really don’t anymore about them now than we did then.
Which is why Timothy Green Beckley’s new Global Communications release “Curse of the Men-In-Black: Return of the UFO Terrorists” is such a welcome and timely addition to the lore on the subject. While Beckley does not claim to have solved the identity of the benighted gentlemen callers, he does provide lots of case histories in which the UFO bogeymen came to visit.
Beckley also presents a rare classic book on the subject called “The UFO Warning,” by New Zealander John Stuart. Stuart began his private investigations of UFOs in 1948, shortly after serving in the New Zealand armed forces in World War II. Some years later, in 1952, he received a strange phone call quite late at night.
“Are you the John Stuart who is interested in what earthmen call flying saucers?” the voice asked.
“That’s right,” Stuart replied. “What can I do for you?”
“I warn you to stop interfering in affairs which do not concern you.”
“Who the hell are you talking to, mate?” Stuart asked indignantly. “And who the flaming hell are you?”
The voice replied to Stuart by speaking an unpronounceable alien name and planet. Stuart then told the voice to go to hell.
“Beware, earthman,” the voice said finally. “You have been warned.”
The line suddenly went dead.
Read more: www.ufodigest.com
Your opinion?