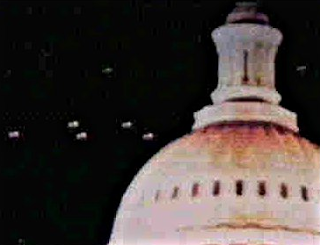 We owe UFOs to the decades of speculations and factoids we’ve grown all our lives listening too. Inter-galactic invasions, revolving saucers etc. have been an important fragment of these claims. However, the cases of this abnormal genre do not make it till the end and turn into a myth. A similar attitude would’ve been adopted towards a congruent intrusion but if it’s the one that made it to the famous White house in Washington D.C, it’ll certainly be dignified by catching eyes.
It was a Saturday midnight, July 19, 1952, when the air traffic controller picked up the erratic signals on the radar. The characteristics of this supernatural phenomenon included boosting at incredible speeds beyond the radar’s capability to catch and non-uniform orbits around the White house. Over the years, the U.S government agencies have been staunch on keeping the mere existence of UFO’s a secret. This happening just seemed to have really crossed the line. As soon as the intrusion was acknowledged by the U.S military, fighter jets were ordered to a hunt down and intercept mission. By the time the fliers were soaring in the sky, these unknown lights had vanished out of sight. When encountered later that night, turned the tables on the interceptor and started to hunt after the fighter planes. Dreading the scourge, the pilot asked for an ‘open fire’ command but fortunately, the enemy air craft retreated without any violence.
This day came down in history as one of the closest apprehensions of extra terrestrials. The President of the United States took a personal interest in this UFO incident. Clamoring media and scientists got the explanation of ‘temperature inversion’ out of the whole unknown lights trauma. The purported rationality of the government agencies was treated derisively. The testimony of the hundreds of eye-witnesses fell on deaf ears and the famous UFO incident at White house, Washington D.C. to this day, remains a mystery to all of us.
© 2010 www.Latest-UFO-Sightings.net 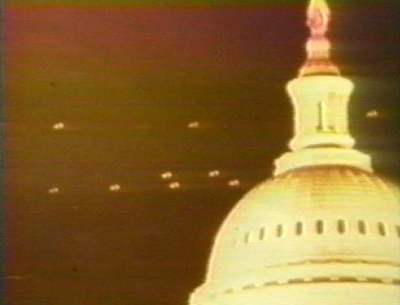 UFO over Washington DC film footage from 1952
This video of film footage does indeed show a pattern of lights that would be very difficult to explain. Is it a hoax?

General Samford’s UFO press conference Pentagon, July 29, 1952
Press conference of Air Force Intelligence Chief, Major General John Samford.
It was held in Room 3E-369 of the Pentagon, July 29, 1952
Following the Unidentified Flying Objects over Washington D.C. A few nights of intense activity over Washington, D.C. On July 19/20, July 26/27 the skies above the nation’s capital were crowded with UFOs darting here and there, over the White House, over the Capitol Building, over the Pentagon. Tracked on radar and visual sightings from the ground. Jet fighters was also scrambled to investigate the UFOs, the jets were outclassed by the speed of the objects. The sightings continued 3 days after this press conference on the nights of August 2/3 – With no real answers from the Government to the mystery.
UFOs – Are we alone? FOX 5 Washington DC UFO Story
News broadcast talks about the historic UFO sightings of 1952 over Washington DC and other historic sightings. Interviews with Steven M. Greer, M.D (disclosure project) and Kevin Randle (author).
WetaExtra: UFOs Washington DC!
Information on the UFOs Washington DC 1952 including interview with Howard Cocklin, retired air traffic controller.
Bill Birnes (UFO Hunters & UFO Magazine author and investigator): 1952 Washington D.C. UFO incident (HST)
W/ Sara Seager, Ph.D., prof. of planetary sciencer, MIT and Nick Pope, British Ministry of Defence (MOD) 1985-2006
Your opinion?