Latest UFO sightings – This UFO photo of unknown rotating object passing over the sky in Tai Lam, Hong Kong was taken on Thursday, 9th September 2010 around 0:30 am. 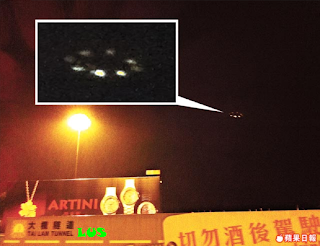 Hong Kongers witness five UFO sightings in one day
In response to the UFO sightings over Hong Kong, Wang Sichao, a planetary astronomer from the Purple Hills Observatory under the Chinese Academy of Science (CAS), confirmed after one week of analysis that the UFO sightings were “ghost images” as a result of the reflection on camera lenses from the intense light emitted by outdoor circular lamps. The outdoor circular lamps are symmetrical to the video image center.
According to Radio Television Hong Kong, within one hour after midnight on Sept. 9, the Hong Kong Observatory received several reports about UFO sightings at the Tai Lam Tunnel, Wan Chai, Happy Valley and other areas amid thunderstorms. The videos and pictures taken by witnesses show that the UFOs are plate-shaped, and several luminous circles formed a large circle. They were constantly moving amid flashes of lightning.
“UFOs have been frequently sighted in Hong Kong recently. On Sept. 9 alone, UFOs were spotted five times. Two witnesses shot a unique flying saucer-shaped UFO capable of moving and a UFO with some lamps arranged in a circular pattern,” said Wang.
Previously, Hu Hongjun, director of the Science Department under the Hong Kong Observatory, gave a common explanation of the UFOs. He said that the light spots are a result the reflection of planets, stars, man-made satellites, shooting stars, luminous kites, Kongming Lanterns or reflector lamps onto clouds. Wang, however, takes a contrary view.
“I have analyzed and researched the UFOs, which are a result of ‘ghost images’ from the reflection of the intense light emitted by outdoor circular lamps on camera lens,” said Wang, “The closer the outdoor circular lamps are to the video image center, the brighter the ‘ghost images’ will be. A bright circular lamp array can be found where the flying saucer-shaped UFO is symmetrical to the video image center, and below the circular lamp array is the lamp post. The ghost images are much darker than the original light source.”

Note: What about all those witnesses that claimed to have seen these UFOs , surely they must be included in his investigation and explanations?
Your opinion?