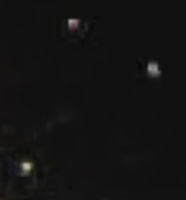 Latest UFO sightings – Video of big unknown lights hovering in the night sky over Cleveland in Tennessee. This footage was recorded on 21st August 2010 around 9:30 pm.
Witness report: On August 21, 2010, seven friends and I were leaving a restaurant in Cleveland, TN, at around 9:30 PM, when we looked up in the sky and saw three large glowing lights in the shape of a triangle.
The first thing I noticed was how huge the object was. The span of the triangle was incredible — it was much bigger than any airplane.
It moved very slowly across the sky. It moved too slowly to have been a plane or jet. The object made no noise and after about 3 minutes, it disappeared from the sky.
I knew it was a UFO as soon as I saw it. One of my friends thought it was jet burners, but there is no way a jet could move that slowly.
All of my other friends watched with awe, and said they had never seen anything like it before. I caught it on video with my cell phone and will upload it with this story.
Author (source: mufon)
Your opinion?