In a bombshell story, a former astronaut of NASA’s space shuttle fleet announced that he–and NASA–know that ETs are real. 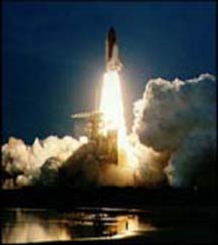 October 29, 2010 – Clark C. McClelland, a senior member of MUFON from 1958 to 1992, has revealed in the Canadian press that secret details of an amazing incident occurred during the STS-80 mission aboard the space shuttle Columbia. Top space officials rushed to hush it up.
Object appeared from “nowhere”
According to internal NASA reports — confirmed by Dr. Story Musgrave, a Payload Specialist crew member aboard the STS-80 mission — a disc-shaped object much larger than the orbiting American spacecraft suddenly appeared beneath the shuttle. At the time the Columbia was maintaining an altitude 190 nautical miles above Earth.
Musgrave admitted that, although he got a good look at it, he wasn’t able to identify the object. “I don’t know what it is. Whether it’s a washer, debris, ice particles, I don’t know. But it’s characteristic of the thousands of things which I’ve seen. What is not so characteristic is it appears to [have] come from nowhere. You would think that if it’s facing the dark side or facing a side towards you which is not reflecting the sun, you would think that you would see something there. It’s really impressive.”
After the shuttle returned to Earth, Musgrave was debriefed about the unworldly encounter. According to the report, the scientist reviewed a video recording of the encounter between Columbia and the UFO as the orbiter flew above Denver, Colorado. The disc-shaped object suddenly appeared, seemed to be intelligently controlled, changed its flight vector and — most unnerving of all — seemed to track the Columbia and her crew through space.
Mission of disclosure
After the mission, the space scientist retired from NASA. Convinced that alien intelligence not only exists, but is indeed here, the NASA astronaut has embarked on his own personal mission of disclosure.

On a recent speaking tour, he gave a presentation about astronomy. At the end of his lecture, he projected a slide upon a large screen depicting an artist’s conception of the infamous “Grey” aliens who have become a part of modern day culture. His final words shocked many in the audience when he proclaimed: “These guys are real…I guarantee it!”
Recently former USAF officers revealed at a press conference in Washington, DC that UFOs are real and cited several incidents at two air force bases where UFOs “took control” of nuclear missiles and changed their launch codes.
Historical archives concerning military and intelligence information regarding UFOs has been released by the UK, France, Spain, Brazil and South Africa.
Dr. Musgrave is not alone in his assertion that UFOs and RTs are a reality. In past years, other NASA personnel have struggled to get the word out. Such space faring luminaries as Gordon Cooper, Donald Slayton, Gene Cernan, Frank Borman (former chairman of Eastern airlines as well), Neil Armstrong and Scott Carpenter insist UFOs are real and alien intelligences exist.
Read more: www.opednews.com
Your opinion?