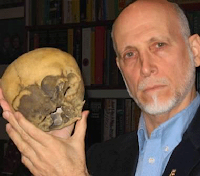 Lloyd Pye is an American author, known for advocating an ancient astronaut proposal for the origin of human life by deliberate intervention by extraterrestrial life and for his work with the Starchild skull, which Pye claims is a relic skull of a human-alien hybrid. He is the author of four books, including Everything You Know Is Wrong – Book One: Human Origins and The Starchild Skull: Genetic Enigma or Human-Alien Hybrid?.. He also gives lectures and has made television appearances in support of his ideas on The Learning Channel, National Geographic Channel, Extra, Animal Planet, and The Richard & Judy Show in the United Kingdom. Pye’s ideas have been criticized for contradicting the evolutionary model of human origins currently accepted by the mainstream scientific community.

About The Starchild Skull:
THE STARCHILD SKULL is a unique 900-year-old bone skull found in Mexico in the 1930s. The Starchild Project is an informal organization which began in 1999 when Ray and Melanie Young, the owners of the Starchild Skull, asked Lloyd Pye to head research efforts to determine what caused the unusual shape and properties of the bone.
The results uncovered by Pye’s team ruled out all known deformities, and presented the scientific community with a genetic and physiological profile never before seen on Earth.

Note: All 9 parts are avaliable in this player!

Starchild Skull 2010 DNA Result
Preliminary new DNA results from the 900 year old Starchild Skull, providing information that a percentage of the DNA in the bone may not be from Earth.