Daytime UFO photos were taken in Mar del Plata in Argentino on 26th February 2010.
Witness report: This photo was taken on February 16, 2010, at the meeting of frigates in Mar del Plata, Argentina. When taking photos I saw nothing, but realized the white, unknown object as I was tranferring the photos to my computer.
I was with my wife at the time I took the photos, and neither of us saw anything ususual at the time.
Indeed, it was a very clear day and there were many people watching frigates, airplanes, and helicopters near the coast.
Photos were taken on a Friday around 15 hrs. The camera is a Fuji FinePix S3500.
Author: Maximo S.
source: www.ufocasebook.com 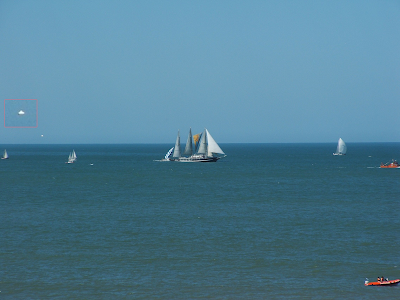 Unknown objects in the sky over Uritorco, Argentina