We already reported about this UFO sighting which happened in El Paso, Texas on 15th October 2010 – link and here’s an update:
October 19, 2010 – EL PASO – A world of doubt continues to orbit around the explanation of those Friday night mystery lights.
“I knew it wasn’t meteorites when I first saw them. And nothing suspends in air like that anyway if it was a meteorite. Meteorites always leave a stream-field.” 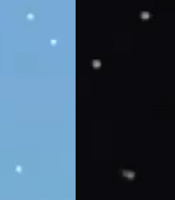 Fletcher Gray… Chief Field Investigator for the Mutual UFO Network of Texas… believes the Golden Knights actually did produce the lights during a stellar Amigo Airsho performance, but he says… we’re definitely not alone.
“MUFON averages in the state of Texas anywhere from 25 to 30, sometimes 40, depends on the month, but we’ve gone as high as 40 recordings in the Texas area.”
Gray says MUFON has received several UFO sightings from the El Paso area in recent months.
“I cleared one sighting as an unknown. Right now we’ve got two ongoing investigations in the El Paso area, one of which was a group of lights that was seen.”
Gray adds… between 80 and 85-percent of reports have an earthly explanation… so earthlings… do not fear.
“As far as I know, I don’t think we’re being invaded…not yet.”
Read more: www.ktsm.com
Your opinion?