Pacific Ocean (CBS8)- A mysterious missile launch off the southern California coast was caught on video Monday evening by a KCBS news helicopter.
The spectacular contrail could easily be seen up in Los Angeles, but who launched this missile and why, remain a mystery for now. 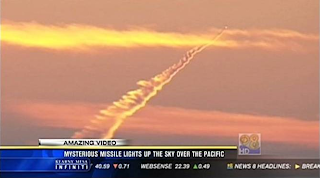 The magnificent images were captured from the KCBS chopper around 5pm. The location of the missile was described as west of Los Angeles, north of Catalina Island, and approximately 35 miles out to sea.
A Navy spokesperson tells News 8, this wasn’t its missile. He said there was no Navy activity reported in that part of the region.
On Friday, November 5, Vandenberg Air Force Base launched a Delta II rocket, carrying the Thales Alenia Space-Italia COSMO SkyMed satellite, but a sergeant at the base tells News 8, there have been no launches since then.
News 8 showed the video to Robert Ellsworth, former U.S. Ambassador to NATO and a former Deputy Secretary of Defense.
He said it didn’t appear to be a Tomahawk missile and said it would be safest to wait for definitive answers to come from the military.
Based on pure speculation, however, Ambassador Ellsworth said, with President Obama in Asia, perhaps this could have been a show of our military muscle.
“It could be a test firing of an intercontinental ballistic missile from a submarine underwater submarine, to demonstrate mainly to Asia, that we can do that,” he said, stressing that it was just a theory.
source (neocryptz @ youtube)
___________________________________________________________________

CBS: UFO or missile? California 11.09.2010
The Pentagon said Tuesday it was trying to determine if a missile was launched Monday off the coast of Southern California and, if so, who might have fired it.

Spokesmen for the Navy, Air Force, and other military organizations said they were looking into a video posted on the CBS News website that shows an object shooting across the sky and leaving a large contrail, or vapor trail, over the Pacific Ocean.
“Nobody within the Department of Defense that we’ve reached out to has been able to explain what this contrail is, where it came from,” Pentagon spokesman Col. Dave Lapan said.
And now I ask… Who can explain what happened?

The mystery missile that was fired off the coast of California has been solved according to Colleen Thomas, a Pleidian contact. She says the US government was firing an ICBM at Iran and was intercepted by the Pleidians. Soon after President Obama ordered another missile fired at the Pleidians in order to continue Bilderberg and the Illuminati’s rule.
My View everyone: I feel this woman is right on with the Truth, which i know it sounds very crazy and far out there but sometimes we have to look at our limited mindset of reality and how conditioned, and Influenced we are by Entertainment, the Elite, MS Media, Magazines, Newspapers, Government,and just our overall environment. If you think that we alone in the unvierse or never been visited and are being visited then you are just sounding like those flat earth people.
The woman just blew the lid off right on RT and i’m just shocked at how they let her even speak of this. I’m so grateful and i truly love and respect this news agency for allowing her to speak. The Mainstream media would make her to look like some nutcase and laugh at her viewpoints of the Pleidians.
“IT’S TIME TO TAKE THE BLINDERS OFF, IT’S TIME TO WAKE UP, IT’S TIME TO GROW UP, IT’S TIME TO EVOLVE, AND IT’S TIME TO START LOVING INSTEAD OF HATING. WE THE PEOPLE ARE BEING CONTROLLED, ENSLAVED, AND LIED TO ON A CONSTANT BASIS AND IF WE DON’T STAND IN OUR OWN POWER AND TRUTH, THEN WE DESERVE MORE PAIN AND SUFFERING IN THIS WORLD”
HUMANITY NEEDS TO GET IT’S ACT TOGETHER, NEEDS TO GET A KICK IN THE ASS AND MOVE FORWARD AND NOT HOLDING BACK, BEING STAGNATED AND LISTENING TO BULL SHIT NEWS THAT JUST CONFUSES THE HELL OUT OF YOU.
source (ufohunter16902 @ youtube)
NBC: Pentagon “We don’t know what it was” but no danger to USA!
That’s the official explanation given by the Pentagon regarding a strange mystery missile looking object seen in L.A. on NOV. 08, 2010