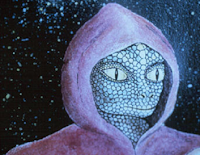 December 21, 2010 – The nebulous world of the internet is chock full of all things fantastic but no available subject can hold a candle to the elaborate, self perpetuating and often absurd category dubiously labeled “Conspiracy theories.” Although this subject may be as old as the earth is young, the unquestionable power of the internet has, needless to say, spawned a deluge of questionable and incredible theories that encompass all aspects of the inhabitable world and the spaces beyond.
Having spent some time, or more honestly, wasted a lot of time watching countless videos on the internet that attempt to surmise the nefarious rise to power of it became alarmingly obvious that the Conspiracy theory category, much like the religions of the world is, with all due respect, an unmitigated mess. Take for example any of the alarmingly imaginative constructs posted on the website: abovetopsecret.com.
Regardless of the truth behind the debate, the far more fascinating aspect of the subject as a whole is the willingness of people to place their faith in a particular subject, be they ya or naysayers. Tom Wolfe the great American Journalist commenting on the ufo conspiracy described the phenomenon as new found faith.” And that religion is, at bottom, not terribly different from most other new religions of the past two Millenia. Most of them, the successful ones as well as those that have vanished, have been based on the belief that there exists Another Order, invisible to the great mass of humanity.” In the world of the conspiracy theorist this other order, much like players in major religions, is responsible for the good and evil in the world and according to the authors of the theories it is to these higher or lower beings that we must look to for answers.
The sensational accounts put forward about our supposed Reptilian overlords and the infamous agenda of the New World Order support an innately human need to believe that something or someone is in charge of what is happening.“The popularity of conspiracy theories is explained by people’s desire to believe that there is – some group of folks who know what they’re doing” this quote by Damon Knight an American science fiction writer accurately describes mankind’s desire to find order in the universe and this apparent desire for order is the driving force behind all conspiracy theories. For what is a more horrifying world than one without order, where existence is meaningless and our efforts to live are futile at best.
If one believes that we are caught in a a matrix designed to imprison the whole of humanity sapping our strength and rendering the species impotent and unable to reach our true potential that belief provides a point or symbol to rally behind without this faith or a faith in god man finds himself alone in the universe and that is more frightening than any bloodsucking reptilian.
Your opinion?

Alleged UFO Technology behind the Presence of Aliens Down Under

WWIII: War between Extra-Terrestrial and Humanity Civilization has Started?